Rai loves the stories of Lord of the Rings, Star Wars, Star Trek, Indiana Jones (her first kitty cat is named Indiana, Indy for short), and The Matrix (take the red pill!), to name a few. She loves getting lost in these enchanting worlds and studying their underlying philosophies. Ancient Egypt has held a particular fascination for her since childhood. She feels right at home surrounded by Egyptian art and books.

Rai feels that novels have the ability to take us on magic carpet rides, allowing us to escape into fascinating and engaging worlds, where the stories become real to us. Storytelling is an ancient, timeless practice and is an integral part of who we are. For Rai, writing a novel is a similar, but far more intense experience and she is thrilled to be a part of such an honored tradition. She believes that these stories are out there, waiting and wanting to be told - that they travel the universe in search of the door, the conduit, to the soul who is meant to tell their tale. She hopes you enjoy the worlds she & Tavius have opened the doors to…

Rai is also working on a series of adventure stories in her Ancient Quest Mystery Series, where she will continue to explore her love of archaeological mysteries. For news on upcoming releases and exclusive bonuses, signup for Rai’s newsletter and get a FREE copy of her archaeology adventure novella Lost City of Gold: raiaren.com/Subscribe

Movies such as The Lord of the Rings and The Star Wars trilogies have ignited his imagination. Authors such as David Eddings and Dan Brown have inspired him to write.   He enjoys learning about ancient Egypt and archaeology. He sometimes looks up at the stars in the skies and wonder about all the amazing stories that have never been told. As a result, he and his college friend, Rai Aren, are pursuing their shared interests of being successful storytellers. 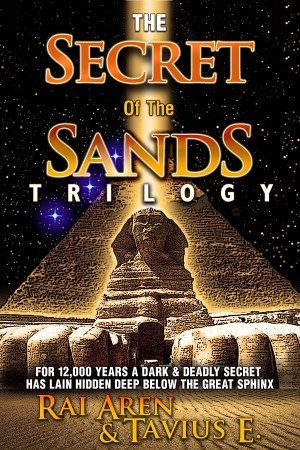 The Secret of the Sands Trilogy by Rai Aren & Tavius E.
Price: $7.99 USD. Words: 336,320. Language: English. Published: January 7, 2017. Categories: Fiction » Adventure » Action, Fiction » Thriller & suspense » Action & suspense
From the Great Sphinx to Petra to the Great Pyramid, journey on this epic archaeology adventure, weaving between the past and the present, to uncover hidden ancient secrets and fascinating mysteries about a long lost civilization… Hold on for a wild ride! The Secret of the Sands Trilogy is an adventure story in the spirit of Indiana Jones & The Mummy!

Would you like to favorite Rai Aren & Tavius E.?

You have been added to Rai Aren & Tavius E.'s favorite list.