Robert Louis Chianese, B. A. Rutgers (1964), M. A., Ph.D. Washington University, St. Louis (1971), is Emeritus Professor of English at California State University, Northridge where he taught courses on British and American literature, literature and art, literature and the environment, and men’s literature. He headed the National Endowment for the Humanities Liberal Arts project at CSU Northridge, which devised an interdisciplinary, team-taught general education program. He has taught literature and the environment as a Fulbright Scholar and Senior Specialist in Bulgaria and China.

He is a Mitchell Laureate for an essay on sustainable societies and founder of The Sustainability Council of Ventura County, California. He is Past-President of the Pacific Division of the American Association for the Advancement of Science (2011-2012) and head of its General and Interdisciplinary Studies section, for which he organizes symposia bringing together the humanities and sciences.

Now retired from teaching, he writes poetry, fiction, and dramatic works. He fishes Northern California rivers and the waters off Ventura where he and his wife, Paula, live and enjoy their two young grandchildren with adoring fascination. 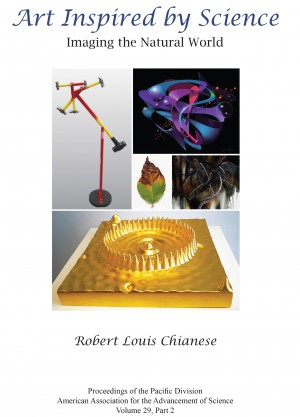 Art Inspired by Science: Imaging the Natural World by Robert Louis Chianese
Price: $3.99 USD. Words: 9,940. Language: English. Published: October 30, 2015 by AAASPD. Categories: Nonfiction » Art, Architecture, Photography » Fine art, Nonfiction » Science & Nature » Amateur naturalist
A monograph on the science-based art exhibit presented on the campus of Southern Oregon University as a cooperative project between the Schneider Museum of Art and the 91st Annual Meeting of the Pacific Division of the American Association for the Advancement of Science June 12 – September 6, 2010.

You have subscribed to alerts for Robert Louis Chianese.

You have been added to Robert Louis Chianese's favorite list.

You can also sign-up to receive email notifications whenever Robert Louis Chianese releases a new book.