Robert Platshorn, author of Black Tuna Diaries and America's longest (30 yrs) imprisoned non-violent marijuana offender. Raised on South St. in downtown Philadelphia, acting ambitions earned him a supporting role in a successful off Broadway play while still in high school. The same skill led to Robert becoming one of
America's most famous pitchmen. The late Billy Mays called him “A legend in the pitch business”. Seen for years on TV, at fairs, and shows selling Vita Mix, frozen food knives, and gadgets. Robert studied communications at University of Miami.
At twenty-four he moved to London to found Dynamic Reading Institutes. Starting with a rented classroom,within three years there were fourteen schools in three countries and his teachers giving classes at Oxford,Cambridge, London University and the House of Lords. On his return to the U.S he started the Ice Cream Factory. Using a unique pushcart he invented, he became the second largest distributor of Breyers ice cream.

He moved back to Miami in 1975 to attend Law School. Miami in the 70's, was the center of the Colombian pot trade. Robert turned his business acumen to the mission of smuggling Colombian cannabis. Attorney general Griffin Bell named Robert's organization the Black Tuna Gang and alleged they were responsible for most of the marijuana crossing the Florida coast. In 1979, a year after quitting the smuggling business, he was
indicted, convicted and sentenced to 64 years in federal prison. He was released in late 2008 after serving almost 30 years in eleven different prisons.

Robert lives in Florida with his wife Lynne. He founded The Silver Tour (www.thesilvertour.org) called the “secret weapon for legalization”, to teach seniors the benefits of medical marijuana. He has appeared at Universities, Concerts, benefits, Expos and in the media to promote the cause. His story was featured in High
Times, The New York Times, CNN, News Week, The Wall St Journal, Time, and many other national and
international media outlets. His writing has been seen in The New York Times, High Times and various
publications.
“Bobby Tuna” is featured in “Square Grouper” the hit documentary on Show Time from rakontur,
producers of Cocaine Cowboys, and the ESPN hit film, “The U.” He is currently producing a half hour show for commercial TV titled, “Should Grandma Smoke Pot?”

Where to find Robert Platshorn online 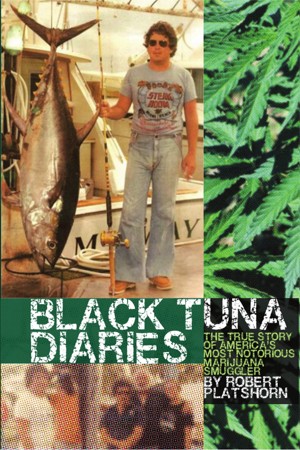 The Black Tuna Diaries by Robert Platshorn
Price: $9.99 USD. Words: 127,300. Language: English. Published: January 11, 2013. Categories: Nonfiction » Biography » Autobiographies & Memoirs, Nonfiction » True Crime » Drug trade
This is a true account of the life of America's most written about marijuana smuggler. Between the accounts of his smuggling adventures, Robert tells his life story. Life as a member of "The South St. Gang", his years as an actor, a famous pitchman, a successful entrepreneur in America and England, Bull Fighter in Spain, TV producer, smuggling pilot, big game fisherman, and federal inmate.

You have subscribed to alerts for Robert Platshorn.

You have been added to Robert Platshorn's favorite list.

You can also sign-up to receive email notifications whenever Robert Platshorn releases a new book.