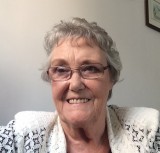 Hi
My name is Rosemary. I am English by birth and.nationality although my parentage stems from Celtic roots. My main passion is writing but I also paint, mostly in oils. I am first and foremost a wife, mother and grandmother; previously a practical, down to earth business woman - now retired.
I have been active on Smashwords for a good many years but as the internet becomes ever more clogged with ebooks in turn it becomes harder for authors to connect with readers. Regretfully Therefore I have decided that the time has come to part company. I will remain on the site as a reader only and continue to post reviews when merited.

Q. When did you start to write?
I began telling stories and writing poems in my head way before I was proficient enough to write them down. Being born dyslexic was a handicap that I had to overcome from a very early age. I can’t ever remember a time when I didn’t write; it is an intrinsic part of me. I am a compusive writer; I have to do it.
Q. At what age did you first get into print?
I was still at Junior School (now called Primary) when one of the teachers recognised that I had a talent for story-telling, even though my written work was badly spelt and my physical writing so poor that it was practically unreadable. Nevertheless she sent one of my (corrected) stories in for an inter-schools competition and to my amazement it won a prize and was eventually included in a book of stories by school-children. I was eight at the time.
Read more of this interview.

You have subscribed to alerts for Rosemary J. Peel.

You have been added to Rosemary J. Peel's favorite list.

You can also sign-up to receive email notifications whenever Rosemary J. Peel releases a new book.