The author, after having been an active spiritual seeker and counselor the past twenty-five years, is generally a quiet nomad living in mountain retreat or shoreline solitude amidst pleasant climes.

On the practical side, Shupe has seen many fleeting endeavors and roles pass through his life, ranging from being an environmental engineer, to a lawyer, mediator, and finally, a water resource consultant described in 1989 by the L.A. Times as “one of the prominent forces for peaceful evolution in Western water policies.”

Shupe laid off his employees in that year for a temporary sabbatical break which quickly became a permanent reality shift filled with spirit guides, psychic encounters, and a path of discovery guided by amazing grace. While composing his spiritual autobiography in late 2000 along the Ganges River, Shupe ran out of steam on the true story, so fashioned a plunge into amnesia to enhance the path of exploration, as recounted in the initial volume of The Nyxall Chronicles, entitled “The Now or Never”.

Towards the end of the conjured amnesia process, the author realized that he was actually caught in a deeper, lifelong cycle of forgetfulness—one on the soul level wherein Spirit had fallen into earthly embodiment without any memory of where it had come from or why it is here. Consequently, Shupe began pursuing an intensive inner journey of discovery primarily involving Himalayan experiences, alternative spiritual practices, and additional writing to jar loose hidden clues and forgotten secrets via creative imagination.

“A Mindgame to Remembrance” charts his subsequent exploits through northern India, juxtaposed with scenes from a humorous heaven which is struggling to guide a stubborn Earth to its ultimate destiny. A third Nyxall Chronicle, “The ‘I’ of the Storm” reflects further explorations into alternative realms of existence, the nature of consciousness, and Mingo and Marla's excellent adventure into planetary upheaval.

In 2015, Shupe traveled to the Peruvian Andes to complete the plunge into the mystery, both in practice and in writing, as reflected in the final Chronicle, “Beyond Illusion”. He welcomes written contact at KOANnowhere@yahoo.com from fellow explorers of this multidimensional universe and its punch lines to freedom.

Please note that the four books in The Nyxall Chronicles, although interrelated, can be read and enjoyed in any sequence, since they each contain unique storylines, messages, and resolution. ["Beyond Illusion" is temporarily unavailable due to editing for the 2020 edition.]

The Nyxall Chronicles: A Path to Spiritual Freedom by Steven J. Shupe
Welcome to The Nyxall Chronicles, a journey of spirit, of imagination, of freedom. The path is lined with humor and intrigue to guide one’s Consciousness—your innate power of perception—to reclaim its rightful place as creator of the known universe. Retaking this throne means supplanting its former master, the measly human ego that kicks and screams at being usurped in the early days of the Chronicles. But as the journey progresses into the dark shadows of the psyche as well as through heavenly heights, Consciousness is ultimately coaxed forth to take the helm to guide the human vessel sailing into new realities and dimensions of discovery. Each Nyxall Chronicle includes a healthy dose of ‘science friction’ wherein an author rubs together fact and fantasy to generate heated suspense and spiritual Light that sends one’s limited existence up in smoke. The four books can be read in any order since each contains unique storylines, messages, and resolution. If you choose to engage in this creative two-step twixt reader and scribe, lead with your inner wisdom, swirl with your imagination, and open sesame to the wonder of an ever-expanding universe—the universe that is you.

The Nyxall Chronicles: The 'I' of the Storm
Price: Free!

The Nyxall Chronicles: The Now or Never
Price: Free!

The Nyxall Chronicles: A Mindgame to Remembrance
Price: Free! 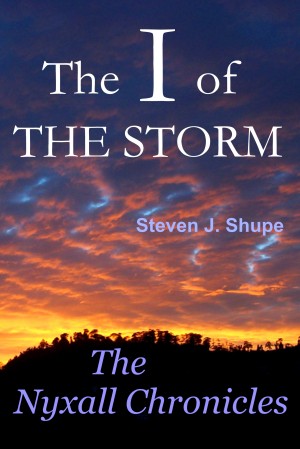 The Nyxall Chronicles: The 'I' of the Storm by Steven J. Shupe
Series: The Nyxall Chronicles: A Path to Spiritual Freedom. Price: Free! Words: 55,550. Language: English. Published: October 28, 2012. Categories: Fiction » Science fiction » Apocalyptic, Fiction » Visionary & metaphysical
Spiritual insights from Himalayan heights team with flights of fantasy as a wobbling planet hurtles towards destruction while carrying an imbalanced culture led by greedy Elites. Will interstellar stud muffin Mingo, tree-hugger Marla, and her native Guardian pals avert disaster? Or will global cataclysm ring in a new era for humanity? An allegory for our times laced with humor and intrigue. 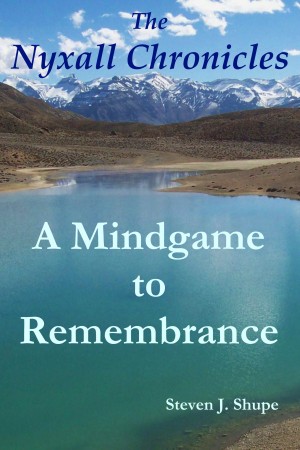 The Nyxall Chronicles: A Mindgame to Remembrance by Steven J. Shupe
Series: The Nyxall Chronicles: A Path to Spiritual Freedom. Price: Free! Words: 55,720. Language: English. Published: October 27, 2012. Categories: Nonfiction » Inspiration » Spiritual inspiration, Nonfiction » Religion & Spirituality » Self-realization
A Mindgame to Remembrance is an innovative journey of awakening for forgetful souls and for longing spirit. Laced with spiritual insight, gentle sacrilege and wit, the book follows a seeker’s true adventures through India—with frequent detours into a humorous heaven where Buddha, Einstein, Magdalena and others help reveal the true purpose of this crazy Earth world and our forgotten roles in it. 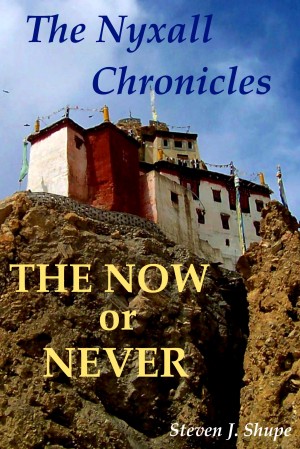 The Nyxall Chronicles: The Now or Never by Steven J. Shupe
Series: The Nyxall Chronicles: A Path to Spiritual Freedom. Price: Free! Words: 108,370. Language: English. Published: October 26, 2012. Categories: Fiction » Humor & comedy » General, Fiction » Visionary & metaphysical
A soulful journey through India, a detour into amnesia, a plunge into adventure as humor lights the way to liberation. A book for awakening Minds who know that spiritual truth lies within—and that it takes a bit of laughter, plus facing the muck at times, to get there. Fiction based in fact, the sacred tinged with sacrilege, and an entertaining boost for those on their path to freedom.

You have subscribed to alerts for Steven J. Shupe.

You have been added to Steven J. Shupe's favorite list.

You can also sign-up to receive email notifications whenever Steven J. Shupe releases a new book.