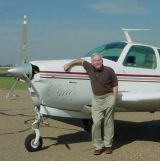 Author Marvin Arnold spent many summers on his grandfather's ranch in Oklahoma. The early part of this novel reflects his memories of the Red River Valley and working in the Texas oil fields. He attended high school near Wright-Patterson AFB where his father had been assigned after WWII. It was here, playing in the boneyard of captured German and Japanese airplanes of ARDC along with befriending the rocketeers from Peenemunde that the author became fascinated with aeronautics. Many aspects of this novel are based on first-hand stories told to him by relatives and family friends returning from WWII. At age 17, the author enlisted in the Naval Air Reserve at Port Columbus Ohio. In the late 1950s, he returned to Oklahoma to attend OU and OCU. Arnold's military experience included Air Force ROTC, tour of duty as an ASW aircrew instructor in a P2V patrol squadron, as a pilot with the National Guard and as an officer in the State Guard. The author learned to fly in his late teens in an aero club based at Max Westheimer Field. Burrell Tibbs, his seventy-year-old instructor had taught Wiley Post to fly years earlier. Arnold holds a commercial license with multi-engine, instrument and seaplane ratings and has flown over 6,000 hours in dozens of aircraft types including air charter in twin Cessna and the Douglas DC3 aircraft. The author and his family are lifelong residents of Texas. His experiences as an aerospace design engineer, as Chief of Avionics Engineering for Aerospatiale plus his avid interest in aviation history, enhance the detail and authenticity of the fictional aviation empire in this novel.

Where to find Marvin Arnold online 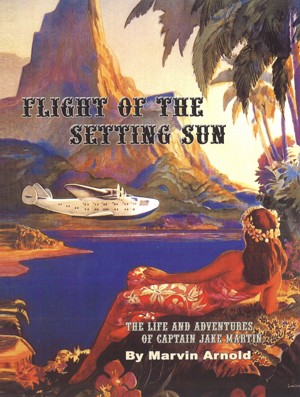 FLIGHT OF THE SETTING SUN, The Life And Adventures Of Captain Jake Martin - Action adventure and love story. It is a period story set in four decades beginning in the mid 1920s. Son of wealthy Texas rancher and oilman becomes a Pan Am China Clipper pilot in the 1930s and an aviation industrialist during and after WW II. Jake's life adventure takes him to New York, California and the Asian Pacific

You have subscribed to alerts for Marvin Arnold.

You have been added to Marvin Arnold's favorite list.

You can also sign-up to receive email notifications whenever Marvin Arnold releases a new book.