Hi There!
I was born in Dublin, Ireland and lived and studied there until I was about 24 before leaving fairly permanently. Since then, I have worked and lived in Europe, the Middle East, Asia, the USA and Australia, teaching both language and literature.
I've always been an avid reader of most genres but my main interest is history, whether it be straight history or re-imagined and semi fictionalised modern events or ancient and mythical accounts. I am especially fond of the Old and Middle English periods - Beowulf, The Battle of Maldon and the later Arthurian romances - and the old Irish mythical past. Not too surprisingly, my first novel, Raiding Cúailnge, is based on the old Irish epic, An Táin Bó Cúailnge or The Cattle Raid of Cooley which recounts the exploits of Ireland's mythical and legendary hero, Cú Chulainn aka Sétanta. Available from 20 April on Smashwords and other major ebook retailers
Currently, I live in Perth, West Australia and I enjoy food and wine, preferably in company with family and friends. I love to travel and most recently I spent three months travelling around Cuba and South America - Ecuador, Peru, Bolivia, Chile and Argentine. Further books featuring Sétanta, aka Cú Chulainn will appear soon.

How do you discover the ebooks you read?
Browsing on Amazon usually, otherwise Abe Books or The Book Depository
Do you remember the first story you ever wrote?
Yes, I do and I may even have it still. For some reason, and despite the fact that I have lived in such a wide variety of places, I seem to have managed to hang on to a much battered cardboard portfolio - I think that's what you call it, in which I have early hand-written stories and - Gawd help me, some poems too, I think!
Read more of this interview.

Where to find Stephen Russell online 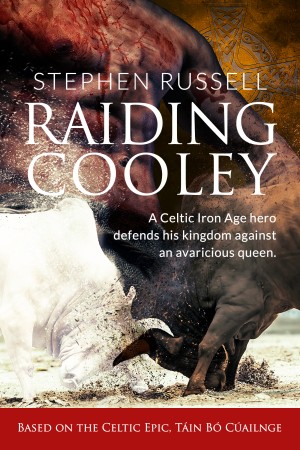 You have subscribed to alerts for Stephen Russell.

You have been added to Stephen Russell's favorite list.

You can also sign-up to receive email notifications whenever Stephen Russell releases a new book.