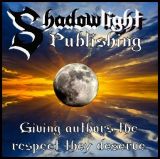 “Out of the shadows into the light”.

Our main aim is to take unique creativity out of the shadows into the light… To nurture uniqueness and individuality, taking readers on a roller coaster ride of imagination and great storytelling, always on a pathway appealing to varied tastes. new age, fantasy, science fiction, murder mysteries, romance, poetry, vampire erotica as well as children’s and youth books. All with one goal in mind… to create through Shadowlight Publishing a product of quality and integrity at a reasonable cost for all readers of books to enjoy either in book or ebook form.
________________________________________

The Shadowlight Publishing was formed in 2012 and commenced Publishing in January 2013 with their first book by their star author R. e. Taylor “Dark and Light Sides of Fantasy”

Elizabeth Waterhouse is a writer, composer and lyricist and at present is working on a demo CD of her Australian Musical The International.

Elizabeth has worked in Television as a Producer/Director/Writer/Film Editor and cameraperson. She also has been an actress, model and television interview host and for two years was President of The Woman Of The Motion Picture Industy of New York. She has also won several Awards for writing and production at The New York International Film and Festival.

Publishing is a new endeavor for Elizabeth and she is elated at this new adventure. A journey ever upwards.

R.e. Taylor was born in Akron, Ohio in 1956. Born to a working class family. By the age of seven, he was reading and writing stories for children. Since then he has developed his talent into writing fantasy fiction. His most recent short story compilation “The Dark and Light Sides of Fantasy” has proven to be so popular it is now in its 2nd edition, and has also just been released worldwide as an E. Book. As an author R.e.Taylor has written three novels, several plays and movie scripts. Numerous short stories and over 500 poems. Poetry is a way for R. e. Taylor to express his most inner thoughts and as a Poet he has already received worldwide acclaim. “Serenity” reveals the more romantic side of his nature. His soon to be released Poetry Book “Confusion” is a brief glimpse into the darker more sinister side of life. Shadowlight Publishing is also extremely proud to announce it has also bought the rights to this authors’s next short story compilation “Australian Myths and Legends”. The Publishing company believes R.e. Taylor is a rare and distinctive talent, an individual who is as unique as his stories, colorful and outspoken, an extremely likeable small town rebel. A giant of a man who lives by the creed “When you grow up you lose your imagination… “I REFUSE TO GROW UP!”
R.e. Taylor’s credo is to “Make the impossible plausible.” He is pleased when someone writes to tell him that a twist he had written into a story surprised them as every word he writes strives for that goal.

Where to find Shadowlight Publishing online

You have subscribed to alerts for Shadowlight Publishing.

You have been added to Shadowlight Publishing's favorite list.

You can also sign-up to receive email notifications whenever Shadowlight Publishing releases a new book.