A professional engineer by training, Sharon is currently a quality, environment and sustainability manager in a large, global engineering consultancy firm. Therefore, writing a novel may seem an unlikely fit. However, Sharon’s upbringing involved moving to Belgium when she was 12 and doing all of her secondary schooling in Flemish, with French and German also taken as subjects. This is where her enjoyment of languages was born.

Upon completing her schooling, she returned to NZ, got her engineering degree, met her engineer husband, got married, and commenced working. Their careers took them back and forth between NZ and Bangkok over a fifteen year period, during which time they added two beautiful children to their family (one born in each country). In addition to learning Thai, Sharon also realised she had a story inside her which she then proceeded to write over the next ten years, squeezing writing in between raising a family and working full time.

Where did you grow up, and how did this influence your writing?
Up until I was ten years old, I lived in a university town in New Zealand called Palmerston North. That year I was ten, my Dad, who was a lecturer, took a sabbatical year, and we spent the year traveling in Europe and America, attending school in Spain for 5 months and Belgium for 2. We returned to NZ the following year, but then when I was twelve, my parents sold our house, car...everything, and moved us to Belgium, where I completed my high-schooling in Flemish. This was not only the birth of my love of languages, but also the experiences of moving to another culture, being uprooted, not being understood, getting through all that...all of these have influenced my writing.
When did you first start writing?
Surprisingly, I never dreamt of being a writer or thought of writing a book. I've always written poems though. I think the fact that I was dumped into a foreign language school at the age of twelve meant that I struggled with creative writing at school, as it was my second language. I did terribly at it, actually. But I've always been an avid reader, with fantasy-fiction my favourite genre. So it was somewhat as a bolt from the blue when, well into my thirties with two pre-schoolers, I suddenly had the idea for the Realm Trilogy books.
Read more of this interview. 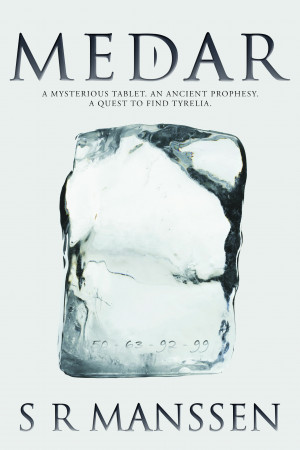 Medar by S R Manssen
Price: $0.99 USD. Words: 63,540. Language: English. Published: June 8, 2018. Categories: Fiction » Fantasy » Epic
A mysterious tablet. An ancient prophecy. A quest to find Tyrelia. Freya is half blind, poor, and lives in land-locked Medar: an unlikely heroine. Yet she finds herself thrown into an adventure that takes her to the very edge of the only world she has ever known. Will she unlock the clues hidden in the tablet? The key to the long-lost path to Tyrelia—and freedom—is in her hands.

You have subscribed to alerts for S R Manssen.

You have been added to S R Manssen's favorite list.

You can also sign-up to receive email notifications whenever S R Manssen releases a new book.