As a girl, Annette dreamed of being an astronaut, but she stank at science and math and became motion sick riding the bus home from school. So she went with her second choice—newspaper journalist—and stuck with it for more than three decades.

After years of ignoring people who said, “You should write a book,” she finally did. And then she wrote a few more.

When she's not working, Annette usually has her nose in someone else’s novel or her eyes glued to sports on TV. She has three totally spoiled pets, enjoys being the designated sightseer on her husband’s Harley, and volunteers at Clearwater Marine Aquarium, home of diva dolphins Winter and Hope from the "Dolphin Tale" films.

Annette is the author of the woman's fiction novella "Getting Her Money's Worth" and the "Gulf Shore" series of contemporary romance novels. "The Shore Thing," Gulf Shore Book 1, will be published Sept. 1. And the sequel, "Shore Feels Right," is scheduled for release Nov. 3.

Where to find Annette Mardis online 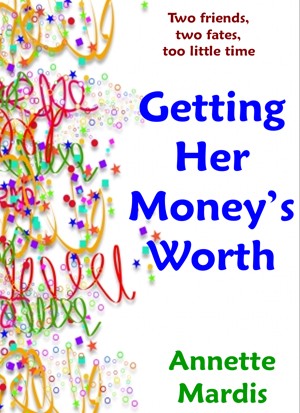 Life often has been unkind to Allie Charles, and she’s determined not to be shortchanged and to live in the moment whenever possible. She and close pal Shelby Martin want many of the same things: romance, fun, friends and satisfying work. Only one will see her desires fulfilled. The other will face her biggest challenge. This touching story will make you laugh, cry and go for the gusto in life.

You have subscribed to Smashwords Alerts new release notifications for Annette Mardis.

You have been added to Annette Mardis's favorite list.

You can also sign-up to receive email notifications whenever Annette Mardis releases a new book.