The Time Travelers: A Christmas Story, listed on Smashwords, was written for and about my grandchildren. They are the characters in the story.

I wrote it for them for a Christmas present (in print format) a couple of years ago. The evening I gave them each a copy of the book, they spontaneously began reading it out loud and continued taking turns around the room until the entire book was read. No matter what I publish, no matter how many favorable reviews I may receive, no compliment will equal that!

I have other completed children's books which I may publish. Right now, I'm focusing on The Six and the Magic Circles, which is another pre-teen book about the grandchildren. This one is an adventure story by request of the kids.

They wanted adventure, magic, dragons, a griffin, super powers, and more. This book is more fun and more challenging than The Time Travelers. The kids have helped, though. They brainstormed with me and have had some fabulous ideas, many of which I'm implementing in the story.

Unrelated works in progress include a humorous story about a grandma who becomes a politician after retirement; a story of a Gros Ventre girl captured by the Crow tribe who grows up to be a warrior chief; and an adult fantasy about a red pearl, a dog, and more. I'm also working on a couple of family books - a photo history of five generations and an anecdotal life journal.

I live with my husband and two little Pomeranians in the Minnesota ice box, way up north by the Canadian border. It's a good place for a writer, since the weather encourages and, at times, demands remaining indoors.

You met our six grandchildren in The Time Travelers - Grayson, Grant, Will, Mady, Garrett, and Leyton. They live quite a distance apart from us, so we see them far less often than we'd like. Writing about them makes me feel more in touch.

Excerpts from various works in progress are posted on my blog - http://squeaksfrombetweenthewalls.com/

What are you working on next?
My main focus at present is another kids' fantasy novel, longer and featuring more adventure. Working name: "The Quest for the Golden Flowers.".
What's the story behind your latest book?
"The Time Travelers: A Christmas Story," the one on Smashwords, is a work of love for my grandchildren. It was a Christmas present for them a couple of years ago.

I'm presently focusing on a longer, more adventurous book tentatively entitled "The Quest for the Golden Flowers," also inspired by the grandkids. The youngest grandkid, Leyton, had the idea of golden flowers as a theme. During a brainstorming session with the kids, they told me some of things they wanted in their story, like magic powers, dragons, a griffin, and more. When I wondered how to include the older grandkids in the book, the second youngest, Garrett, suggested they all become 10-years-old upon entering the magic realm. Perfect! Their input has made writing "Quest for the Golden Flowers" more fun and challenging than "The Time Travelers; A Christmas Story." The other grandkids involved in the Golden Flowers book are Grayson, Grant, Will, and Mady.
Read more of this interview.

Where to find Eunice Korczak online 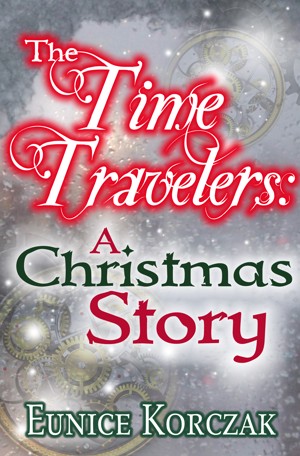 Five kids accidentally travel through time to see Grandma as a kid. They meet Grandma as a kid and even go Christmas fooling with her, but cannot reveal who they are because they "Must not disrupt the flow of time." Preteen with some big words. About 10, 000 words.

You have subscribed to alerts for Eunice Korczak.

You have been added to Eunice Korczak's favorite list.

You can also sign-up to receive email notifications whenever Eunice Korczak releases a new book.