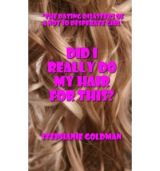 Stephanie Goldman grew up the youngest of five girls in affluent Orange County, California. By the time she graduated high school, she had moved to Tennessee to attend college and fallen deeply in love with competing Tennessee Walking Horses. Stephanie also loved fashion and design, so after receiving a Bachelor of Science Degree in Fashion, she decided to stay in Tennessee and combine her two greatest loves by starting her own equestrian apparel business, CJ Jeans Co.
Stephanie would entertain her friends with stories of growing up in an unconventional household, which could have been ripped straight from a script of an O.C. episode. She loves making people laugh and has endless stories about college and relationships. Her sarcasm and tell-it-like-it-is writing style pulls readers into her world with ease. Because of this, Stephanie started a blog, "Did I Really Do My Hair for This?" She knew she wasn't the only twenty-something out there carrying around a magnet for disaster, and judging from the readers who visit her blog everyday, she is not alone in experiencing the sort of dating disasters and awkward encounters with men that most people are too embarrassed to mention in public.
Hence, her blog took off quickly and has provided many nights of laughter and fun for women all across America. Now with the release of her first book, which shares the same title as her blog, Stephanie will be putting forth her misadventures with men into print form for the whole world to enjoy.
Ms. Goldman lives just outside of Nashville, Tennessee, where she continues to search for Mr. Right.

Where to find Stephanie Goldman online 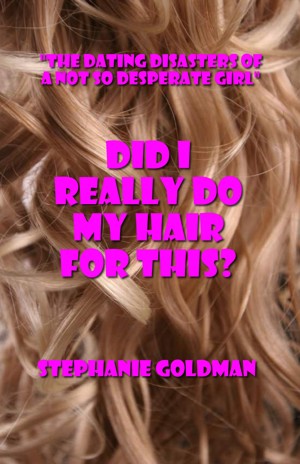 Did I Really Do My Hair For This? by Stephanie Goldman
Price: $3.99 USD. Words: 35,810. Language: English. Published: January 11, 2013 by Sakura Publishing. Categories: Nonfiction » Relationships & Family » Dating
Ever been on a disastrous date? You're not the only one! Dating myths and mayhem are all debunked in this gotta have blog-series-turned-book featuring wildly entertaining stories of love gone awry. Stories are brutally honest, sexually explicit, and most of all, a funny depiction of the modern dangers of dating men as told from the perspective of a woman trying to make it in the dating world.

You have subscribed to alerts for Stephanie Goldman.

You have been added to Stephanie Goldman's favorite list.

You can also sign-up to receive email notifications whenever Stephanie Goldman releases a new book.