Thorne Douglas was the pseudonym for Benjamin Leopold Haas born in Charlotte , North Carolina in 1926. In his entry for CONTEMPORARY AUTHORS, Ben told us he inherited his love of books from his German-born father, who would bid on hundreds of books at unclaimed freight auctions during the Depression. His imagination was also fired by the stories of the Civil War and Reconstruction told by his Grandmother, who had lived through both. “My father was a pioneer operator of motion picture theatres”, Ben wrote. “So I had free access to every theatre in Charlotte and saw countless films growing up, hooked on the lore of our own South and the Old West.” A family friend, a black man named Ike who lived in a cabin in the woods, took him hunting and taught him to love and respect the guns that were the tools of that trade. All of these influences – seeing the world like a story from a good book or movie, heartfelt tales of the Civil War and the West, a love of weapons – register strongly in Ben’s own books. Dreaming about being a writer, 18-year-old Ben sold a story to a Western pulp magazine. He dropped out of college to support his family. He was self-educated. And then he was drafted, and sent to the Philippines. Ben served as a Sergeant in the U.S. Army from 1945 to 1946. Returning home, Ben went to work, married a Southern belle named Douglas Thornton Taylor from Raleigh in 1950, lived in Charlotte and in Sumter in South Carolina , and then made Raleigh his home in 1959. Ben and his wife had three sons, Joel, Michael and John. Ben held various jobs until 1961, when he was working for a steel company. He had submitted a manuscript to Beacon Books, and an offer for more came just as he was laid off at the steel company. He became a full-time writer for the rest of his life. Ben wrote every day, every night. “I tried to write 5000 words or more everyday, scrupulous in maintaining authenticity”, Ben said. His son Joel later recalled, “My Mom learned to go to sleep to the sound of a typewriter”.

Where to find Thorne Douglas online 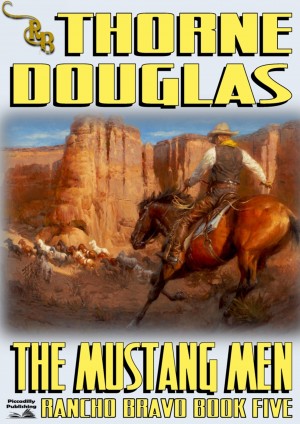 Rancho Bravo 5: The Mustang Men by Thorne Douglas
Price: $0.99 USD. Words: 49,470. Language: English. Published: November 27, 2014 by Piccadilly. Categories: Fiction » Historical » Western & American frontier, Fiction » Adventure » General
He had been a horse thief once. His name was Shan Tyree. Coming into Texas, he encountered Rancho Bravo and found what he'd been looking for. A place to belong, where he could use his abilities on the new horse ranch being put together.When the old partner turned up, it screwed up everything that had been going Tyree's way - he didn't like the threat to his new way of life. LAST IN THE SERIES. 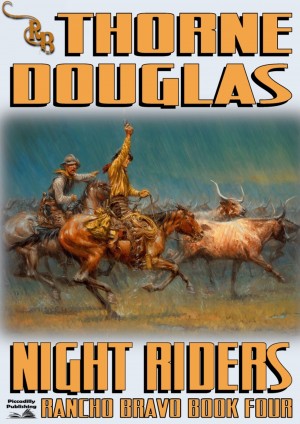 Rancho Bravo 4: Night Riders by Thorne Douglas
Series: Rancho Bravo, Book 4. Price: $0.99 USD. Words: 60,430. Language: English. Published: July 31, 2014 by Piccadilly. Categories: Fiction » Historical » Western & American frontier
Ex-slave, Elias Whitton was a partner in the Rancho Bravo. He had pledged guns and supplies to the Comanches to help them through the winter. But the RB wagon train loaded with the promised goods was a thousand miles away. Elias suggested they give them their guns the others said it was madness. It was their only chance - as two vicious killers out there could dash their only shred of hope. 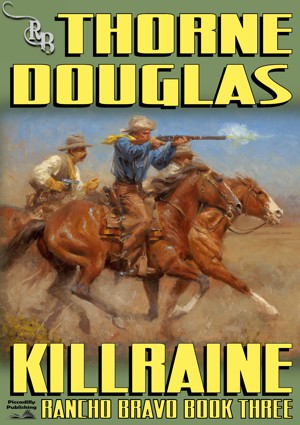 Rancho Bravo 3: Killraine by Thorne Douglas
Series: Rancho Bravo, Book 3. Price: $0.99 USD. Words: 63,260. Language: English. Published: April 30, 2014 by Piccadilly. Categories: Fiction » Historical » Western & American frontier, Fiction » Adventure » Action
Killraine never had a passion for killing. Then Jethro Lawrence and his band of thieving cutthroats ambushed the Rancho Bravo wagons and made off with over a hundred thousand dollars. Worse, Lawrence had taken Killraine’s girl, Jenny, and kept her prisoner. Killraine was filled with a hate that shocked him. Nothing could stop him from going after the Lawrence gang. 3rd in the all-action series. 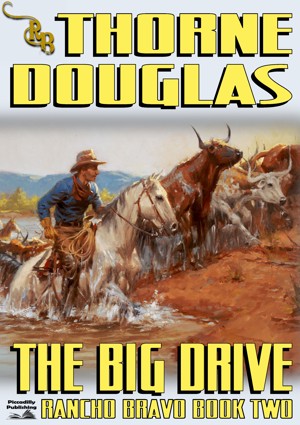 Rancho Bravo 2: The Big Drive by Thorne Douglas
Series: Rancho Bravo, Book 2. Price: $0.99 USD. Words: 67,020. Language: English. Published: December 27, 2013 by Piccadilly. Categories: Fiction » Historical » Western & American frontier, Fiction » Adventure » Action
They were an odd mixture -- a rancher whose ranch was about to be taken from him by Yankee carpetbaggers ... a former slave ... a Confederate officer who'd lost his right hand ... and a Yankee captain who'd sooner join them that fight them. Together Henry Gannon, Elias Whitton, Loosh Calhoon and Philip Killraine were going to drive four thousand head of wild longhorns and nothing would stop them. 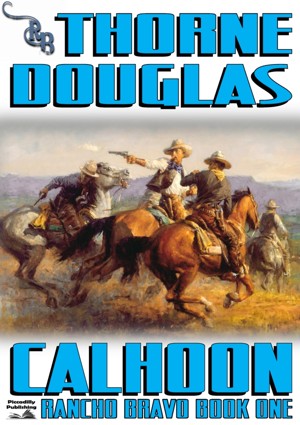 Rancho Bravo 1: Calhoon by Thorne Douglas
Series: Rancho Bravo, Book 1. Price: $0.99 USD. Words: 56,800. Language: English. Published: July 26, 2013 by Piccadilly. Categories: Fiction » Historical » Western & American frontier
Ex-Confederate Lucius Calhoon is on the trail of the Yankee officer who tortured him in jail, leaving him without his right hand. With his plantation gone, cotton confiscated all he has left is his hatred for the Yankee officer. Before he can exact revenge, he teams up with two men fighting against the crooked judge who just happens to be the father of the man he's hunting.

You have subscribed to alerts for Thorne Douglas.

You have been added to Thorne Douglas's favorite list.

You can also sign-up to receive email notifications whenever Thorne Douglas releases a new book.