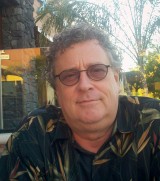 T. Mason Gilbert is a humorist by nature. Although he has traveled in many different (and sometimes opposite) fields of endeavor, his past is not checkered. It is more of a chessboard, full of strange and unusual strategies—some worked and some failed, but it was never dull.

Before writing novels, he had written jokes for other stand-up comedians, screenplays, and sitcoms. At one time, he was a sidekick for a well-known Los Angeles radio DJ doing impressions, and producing a live show for the DJ at the Laugh Factory. He also did voiceovers for Premier Radio Network and was one of ten finalists for the new Mickey Mouse voice in 2009.

His first novel, "The Sacrifist," is an adventure about the hunt for a yeti that is killing climbers in the Himalaya. His second book will be a compilation of his short stories which span all genres. Another book planned for release in October 2016 is a zombie novel which he says will be one of the most original zombie ideas ever. He lives with his wife of 37 years in Orange County, California.

Where did you grow up, and how did this influence your writing?
I was born in Minneapolis, but moved to Southern California when I was five years old. I grew up in a place that is now referred to as the Inland Empire. The town of Rialto was a nice town to grow up in. If you saw the movie 'Dazed and Confused' by Richard Linklater you have the best reference for the environment I grew up. I came from the classic broken home and so really had no guidance growing up. But there was a teacher in High School, Charles Grande, who got me interested in what life was all about and it influenced me for the rest of my life. I have always been interested in learning new knowledge and meeting new people. So my writing includes interesting factual information along with my own imagination.
When did you first start writing?
I have been writing stories since I was a kid. I always wanted to be a stand up comedian. I wrote jokes for some well known comics and also was on the air in Los Angeles as a sidekick personality for Frazer Smith on 97.1 KLSX FM. Frazer referred to me as Todd the Talking Dolphin because I could do an impression of Flipper. I did other impressions on the air for Frazer and also produced his 'Frazer After Midnight Show' for the Laugh Factory. I wrote a lot of speculative screenplays at that time as well. My novel 'The Sacrifist' was originally going to be a screenplay but I never got around to writing it.
Read more of this interview.

You have subscribed to alerts for T. Mason Gilbert.

You have been added to T. Mason Gilbert's favorite list.

You can also sign-up to receive email notifications whenever T. Mason Gilbert releases a new book.