Shaun O’Gorman was a Police Officer for 13 years. The depravity, violence and trauma he saw people perpetrate against each other had a devastating affect on him. He found himself lying in bed, three nights in a row, with a Glock pistol at his head, trying to find a reason not to end his life. Shaun has just released his book “My Dark Companion” that journals his Police Career, his battle with PTSD, Depression and Suicide and the 15 year journey back to a happy life. He now helps other Police, Military and First Responders learn how to cope with the horror they see while still serving the community and doing their job.

Shaun comes from a strong Police family, his father is a highly decorated officer who served in the Queensland Police for 42 years and his uncle an Assistant Commissioner of Police. His father was the Qld Police Union president and dedicated his life to serving his community. Shaun followed in his foot steps. Shaun spent most of his 13 year career in the Police Dog Squad where he was constantly involved in armed hold ups, sieges, vehicle pursuits, violent domestics and the like. The toll that this work took on him lead him to becoming an angry and violent individual but still he didn’t realise there was a problem.

After being diagnosed with PTSD and clinical depression, Shaun resigned from the Police, ashamed and a broken version of his former self. He was let down by the Police Department and has spent the last 15 years fighting PTSD and depression by educating himself on how to live a better life. This is the story contained in his book “My Dark Companion”. He now works with other Police, Military and First Responders to help them understand the impact their job will have on them and how to cope with the horror they see every day.

Where to find Shaun O'Gorman online 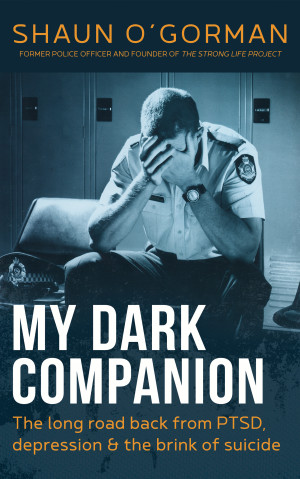 My Dark Companion: The long road back from PTSD, depression & the brink of suicide by Shaun O'Gorman
Price: $9.99 USD. Words: 74,260. Language: English. Published: May 25, 2017 by MoshPit Publishing. Categories: Nonfiction » Health, wellbeing, & medicine » Mental health, Nonfiction » Health, wellbeing, & medicine » Work-related health
“The fear I felt was not from the incident, it was that if the department found out I was struggling, I would lose the only place in my life where I had ever felt I belonged.” Shaun O’Gorman’s 13-year Police Career ended after a series of traumatic cases caused severe PTSD. In My Dark Companion Shaun shares, openly and in detail, his long road back from PTSD, depression and a battle with suicide.

You have subscribed to alerts for Shaun O'Gorman.

You have been added to Shaun O'Gorman's favorite list.

You can also sign-up to receive email notifications whenever Shaun O'Gorman releases a new book.