Dennis Sloan has been passionate about empowering urban youth through education and a positive self-esteem since his youth. In college, he coordinated his fraternity’s youth drill team which started in a Durham, NC housing project. He used his position as president of the Student Government Association of NCCU to reach out to Durham’s youth through child literacy volunteerism and youth comprehension engagement at the public library and schools in poor areas.

After graduation he worked for the Fisher Branch YMCA (Detroit), the same branch he learned to swim. He help design youth development programs. He headed the Physical Fitness Department and ran the After School Fitness Fun program. He also created and coordinator an annual Fisher Y community parade. In every position, he rolled up his sleeves and pant legs to get knee deep in his passion, working with and empowering children. He found a gift of engaging children in fun, non-threatening ways. He has always pushed children to embrace school and worked with many, tutoring and motivating them to excel academically.

20+ years after, at a very low point in his life, he tells everyone who will listen about the time a late model Jag pulled up beside him and a smartly dressed man bolted out. This frightened Dennis because of the violence that was beginning to envelope his community. The driver rushed toward Dennis saying “Mr. Sloan, I know you don’t remember me but you used to be my basketball coach at the Y. Thank You! Some of the lessons you taught me helped me stay out of the streets and in school.” He reached into his pocket before shaking Dennis’ hand and thanking him, slipping him a $100 bill. This was a pivotal point in his life. At a point when he was considering giving up on the vision that he says God gave him, he received confirmation not to get tired.

After the YMCA branch’s closing, Dennis changed career directions and entered the business world as a sales/service professional. He’s had the opportunity to work with a number of multi-nationals including MCI, Ameritech Cellular, Nextel Communications, Radio Shack, General Foods and University of Phoenix. He also trained under Ron Gibel, owner of Urban Office Products which was at the time of his employment NYC’s largest minority office supplier. This is where he was able to learn about the art of the deal.

After the death of his mother, he re-evaluated his priorities. He needed to make a difference and leave this planet in a better position than when he came. In 2005, after seeing a neighborhood child twerk and rap every lyric of an inappropriate gangsta rap he engaged her. After discovering she did not know her phonics sounds and recognizing her intellectual brilliance from previous conversations with her, he got busy.

He began creating an educational puppet show and began having shows in his back yard. The shows were cheesy. The puppets looked like and were handmade, the stage was a discarded refrigerator box and the soundtrack was amateur at best. Even though the shows were cheesy the children loved them. Dennis used his business experience and looked at the shows from the customer’s (children) perspective. He knew the experience had to be ‘child friendly” AKA fun. With limited resources he focused on what resources he had. He just needed to be creative in using them. He served freshly popped popcorn. He also served grape Kool Aide with lemon Kool Aide ice cubes made in a mini fruit ice cube mold. He performed physical humor to make them laugh. So as the children sang, rapped and laughed, they ate fresh popcorn and drank Grape Kool Aid served in a clear plastic cup showing Lemon Ice floating around in the shapes of fruit.

One day a grandparent praised Dennis after a show saying that her daughter was always dumping her son off on her to go to a party or happy hour and that she was glad her grandson could come to an educational happy hour. Father Time’s Educational Happy Hour was born. He designed the Reading 2 Win literacy program for a local non-profit that was used in the Detroit Public Schools system. With the proceeds he developed a much more professional puppet show. The puppets were still handmade but by a newly purchase sewing machine. The stage was built with corrugated plastic. The soundtrack was created on a used laptop, purchased to allow the insertion of sound effects and the opportunity to learn basic graphic art skills to further develop the show.

Now it was time to take his show on the road. Dennis has had the pleasure of performing or holding puppetry workshops for children at Boys and Girls Clubs in Southeastern Michigan, the Detroit Public Schools & Library system. In 2007, he performed at the Michigan State Fair. These venues were in addition to the countless backyards and basements he performed in front of children at risk of suffering illiteracy. In 2008 he authored his 1st children’s title- Do Not Give Up! The Barak Obama Story and Activity Book to commemorate the historic election of President Barack Obama. It identified the similarities of President Obama and urban children as motivation for them to excel academically.

One day he was walking through the Motor City Casino and heard someone loudly rapping the lyrics to a rap in his puppet show. He turned around and recognized a vendor from an Eastside Detroit Flea Market he performed a few months prior. The vendor was rapping the lyrics to If I Can Read You Can Read, a motivational rap that helps build blending skills. The vendor began telling his companion about the show and the reaction from the children. He told his companion “this man is Sesame Street from the Hood.” He began telling his friend about how child engaging, hip hop and fun the show was.

Dennis would always tell anyone that would listen that the educational content from his shows was effective at motivating inner-city children at risk of illiteracy to want to read and to build their reading skills. Why? Because he made it fun! This Casino encounter was the conformation that he needed to take a leap of faith. He knew he could compete with Sesame Street and Dr. Seuss as far as the effectiveness of his educational content. The challenge was to produce it within a business model that monetized it but kept the core value in place, empowering children at risk of suffering illiteracy. Now it was time to get busy.

In 2009, he committed full time to developing a series of multi-media projects that could reach a broader audience of children most at risk of illiteracy but, that would be enjoyed by all children. This would mean living a very meager (poor) lifestyle that included homelessness a few times. But that commitment would lead him to receive a Certificate of Entrepreneurship from Wayne State University’s Tech Town Fast Trac program and a Certificate of Completion from High Scope’s Youth Workers Essentials Series. He also sought out cost effective graphic arts, video and audio editing training, remembering a lesson learned from Ron Gibel- “To be successful in business you have to know your business like the back of your hand, invest your time to the end result, work your business like tomorrow is not promised and instead of talking about success, just be about success.”

He also wrote. In completed, draft or development form, Dennis has created numerous multi-media projects targeting children at risk of suffering illiteracy but entertaining to all. These include The Magic Word, The Magic Phrase, What’s My Name?, Alphabet Soup, If I Can Read You Can Read, The Power of Practice and Little David’s Big Problem, the first of a biblical project he is excited to begin in the fall of 2015.

Still living a pretty meager lifestyle, Dennis is excited to introduce the very first of his published titles, The Magic Word.

When did you first start writing?
I've been writing for about 20 years. I use music as an Art Therapy and have about 50 songs that probably will never see the light of day. As far as Children's educational stories about 14 years. I've written tons of stories for my educational puppet shows. Many of those will become children's titles and songs I plan to make music videos out of.
What's the story behind your latest book?
Maybe in 2005 I saw one of my neighbors, a cute, very smart 6 or 7 year old girl twerking and rapping every word to an inappropriate 'Gangsta' rap song. A few days later I started quizzing her on her reading skills. She had poor Alphabet Recognition skills and hardly no Phonics skills and no Blending skills. I've always had a gift for talking with children in a serious yet fun, non-threatening way so I discovered that she did not like school because kids teased her and she hated reading because it was boring. She liked rap (she rapped a few songs and it was real crazy stuff) because she thought it was fun and she wanted to be rich.

During this time I was giving free educational puppet shows in my backyard. The few she did attend (her parents did not see the need to bring her down to the shows) she enjoyed. One character she really enjoyed was The Amazing Puppet Magician. Her favorite part of one show she attended was when he made the past the present (by replacing the ed on the end of words with ing). She, and almost every other child, who attended those shows, remembered the Magic Phrase that he used to make magic. This was the premise of the story. I wrote a few notes and put it down for a few years. In 2011, I found the notes and began writing it.
Read more of this interview.

Where to find Dennis Sloan AKA Mr. D online 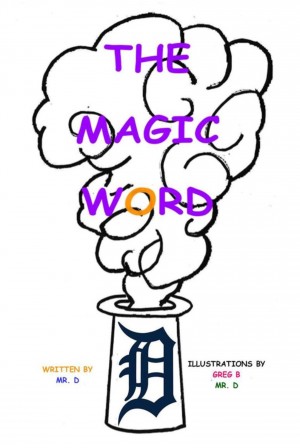 The Magic Word by Dennis Sloan AKA Mr. D
Price: $5.00 USD. Words: 1,340. Language: English. Published: April 30, 2015. Categories: Fiction » Children’s books » Readers / Beginner
This is an entertaining story that stresses the magical powers of reading. Excellent story book for bedtime and storytelling sessions. I hope that you and your children enjoy my story!

You have subscribed to alerts for Dennis Sloan AKA Mr. D.

Would you like to favorite Dennis Sloan AKA Mr. D?

You have been added to Dennis Sloan AKA Mr. D's favorite list.

You can also sign-up to receive email notifications whenever Dennis Sloan AKA Mr. D releases a new book.