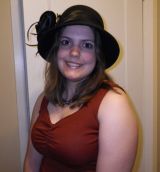 Born and raised in rural western Quebec, Thea Gregory moved to the big city at 17 to attend college. She has had an eclectic career ever since, and has studied computer networking and physics and worked in technical support, sales, and teaching. She presently lives in Montreal, Quebec. Thea enjoys zombies, cycling, reading, walking, cooking and dreaming up twisted scenarios for future projects.

Where to find Thea Gregory online

You have subscribed to alerts for Thea Gregory.

You have been added to Thea Gregory's favorite list.

You can also sign-up to receive email notifications whenever Thea Gregory releases a new book.