Thomas Gunning is Content Managing Editor for Omaha's Pioneer Publishing & PioneerMedia Inc. He wrote "Pacts of Desperation"; "Stirring Up the Animals: An Evening With H.L. Mencken," a one-person play, and "The Game of Clouds and Rain," a collection of his essays and newspaper columns.
He was a military journalist before editing newspapers in South Dakota, Iowa and Nebraska. He won the Nebraska Associated Press Association’s Best Column award, and spent four years as executive editor of Weddingpages, Inc., where he published twice-yearly bridal magazines in the nation's 50 top markets.
He is writing "Hound of Winter," the sequel to "Pacts of Desperation." "Stirring Up the Animals" will be published on Smashwords.com this autumn. His blog, "Pardon & Mirth," can be found at www.thomasgunning.com. He resides in Omaha, NE.

What's the story behind your latest book?
It's about a quartet of widely diverse women, usually from different worlds in a tri-stellar system called the Talon Cluster. Each woman is strong in her own ways, but they are formed in differing planetary cultures. Ultimately, their interactions violently impact the settled planets of the Talon Cluster. Although there are many military elements, the focus is on how each of these women, whether allies or enemies, react to the tensions, violence and horror that come from attempts to dominate one's neighboring planets.
What else do you write besides science fiction?
I write a blog called "Pardon & Mirth" at www.thomasgunning.com. The posts are essays like the newspaper columns I once wrote, edited and published. A column I wrote about my grandmother's death in the midst of her large Irish family won a "Best Column" nod from the Nebraska Associated Press Association. The personal essay remains my favorite genre.
I also wrote a one-man play based on the writings of H.L. Mencken, the great journalist, columnist and cultural critic of the early 20th century. Although it hasn't yet been produced, I hope to publish it, with illustrations, later this year on Smashwords.
Read more of this interview.

Where to find Thomas Gunning online 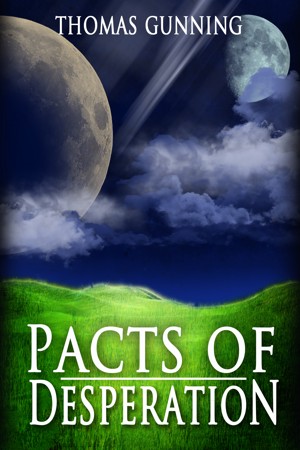 Pacts of Desperation by Thomas Gunning
Price: $1.99 USD. Words: 103,190. Language: English. Published: December 1, 2012. Categories: Fiction » Science fiction » Adventure, Fiction » Fantasy » Epic
The Confederation of Allied Worlds gobbles up free planets. Its next target is green Belfrey. Those involved include Caitaliné Talavera of Troop Morghan, whose heart gets pinched between blood oath and blood contract, and Alexis DeWinter, the Confederation's best general, whose invasion seems a success. The only way to defeat DeWinter is to recruit the high-tech "elves" of neighboring Somerset.

You have subscribed to alerts for Thomas Gunning.

You have been added to Thomas Gunning's favorite list.

You can also sign-up to receive email notifications whenever Thomas Gunning releases a new book.