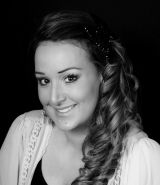 Tillie Cole is a Northern girl through and through. She originates from a place called Teesside on that little but awesomely sunny (okay I exaggerate) Isle called Great Britain. She was brought up surrounded by her mother -- a farmer's daughter, her crazy Scottish father, a savagely sarcastic sister and a multitude of rescue animals and horses.

Being a scary blend of Scottish and English, Tillie embraces both cultures; her English heritage through her love of HP sauce and freshly made Yorkshire Puddings, and her Scottish, which is mostly demonstrated by her frighteningly foul-mouthed episodes of pure rage and her much loved dirty jokes.

Having been born and raised as a Teesside Smoggie, Tillie, at age nineteen, moved thirty miles north to the 'Toon', Newcastle-Upon-Tyne, where she attended University and graduated with a Bachelor of Arts honours degree in Religious Studies. She returned two years later to complete a Post-Graduate Certificate in Teaching High School Social Studies. She regards Newcastle to be a home from home and enjoyed the Newcastle Geordie way of life for seven 'proper mint', 'lush' years.

Tillie, from a very young age has been part of the theatre community and loves nothing more than to entertain through the mediums of cheerleading, dance, drama and singing (sometimes in the rain). She can also be found in nightclubs around the world imitating her favourite artists alongside her crazy BFF’s - The Teesside Massive - or, sat on the front row at the theatre bopping along to her favourite musical, ‘The Rocky Horror Picture Show ’, clad in a only a maids outfit, clutching a bag of rice and sporting a vibrant shade of red lipstick.

One summers day, after finishing reading her thousandth book on Kindle, Tillie turned to her husband and declared, "D'you know, I have a great idea for a story. I could write a book." Several months later, repeating the same tired line, she was scolded by her husband to shut up talking about writing a novel and 'just bloody do it!' Immediately she set off on a crazy journey, delving deep into her fertile imagination. Tillie, ever since, has written from the heart. She combines her passion for anything camp and glittery with her love of humour and dark brooding men (most often muscled and tattooed – they’re her weakness!).

After years of teaching high school Social Studies and following her Professional Rugby Player husband around Europe, they have settled in Calgary, Alberta where Tillie spends most of her days (and many a late night) lost in a writing euphoria or in her dream of pursuing a dazzling career as a barrel-racing, tasselled-chap, Stetson-wearing cowgirl... Ye-haw!

Where to find Tillie Cole online

You have subscribed to Smashwords Alerts new release notifications for Tillie Cole.

You have been added to Tillie Cole's favorite list.

You can also sign-up to receive email notifications whenever Tillie Cole releases a new book.