I am living proof you're never too old to get in the game. I first tried my hand at writing when Star Trek: TNG began open acceptance for screenplays. I've loved Trek since I was a kid, but the open policy closed before I finished my story. I converted the story to a novel, found an agent for new writers and submitted my manuscript only to have the door shut by the publisher. Like many, I was distraught after so much work, but years later I found the joy of writing once again while dating my wife. I wrote her over a hundred poems during our long distance courtship and she encouraged me to get back to the keyboard. The magic of the internet brought us together and gave me the venue to share stories with friends and family. The opportunity of blogging came later and all the while I read and utilized workbooks to hone my skill. I've always been inspired by great films, books and television. I have tremendous respect for those who take on the task of adapting novels to screenplays, but inside I wanted to build worlds from my own imagination, shape my own characters and employ the elements I loved best. The traditional publishing industry is harder to break into than ever before, but just like the magic that found me the love of my life, the internet and self-publishing provides a voice of written wonder to the world and I'm thrilled to be a part of that magic.

What are your five favorite books, and why?
"Gates of Fire" by Steven Pressfield - I've always loved the gallant story of the 300 Spartans, but this novel gives a depth and history untouched by any other version I've seen or heard. The actual battle is only a fraction of the story, and the author digs deep into the intense loyalty and tradition of their homes, their incredible women, and the way of life they fought so valiantly to preserve.
"Outlander" by Diana Gabaldon - Not only is this story incredibly unique in its architecture, but equally simplistic in the raw power of its dual love story. Historical fiction is no easy path to tread, but Diana does so with grace, power, and the all important quality of suspension of disbelief.
"I, Robot" by Issac Asimov - This long-standing sci-fi classic has probably spawned more stories about the cautionary tale of self-aware machine than any other in history. I love the perspective now as you soak in the author's vision of the future from a century ago, but the core of the tale will never grow old.
"The Great Gatsby" by F. Scott Fitzgerald - Has there ever been a more powerful story of the lengths a man will go to win the love of a woman he adores? This classic is a wonderful period piece but in reality, could be transplanted into almost any time period. The romanticism of the story yearns on every page, and even though you feel his chances are slim, you hold to the glinting ray of hope he will succeed. The ending is tragic, but then Gatsby was born of tragedy and his fate seemed inevitable, yet I still mourned his end. Beautifully written and thrilling to read.
"The Fall of Reach" by Eric Nylund - We all have our guilty pleasures, and while this adaptation of a video game may not go down in history as a literary classic, it paints a compelling mural on a game that has touched millions of lives. This story delves into the shadowy backstory of the legendary Master Chief, and how he came to be is both utterly tragic and moving, but his staunch humanity makes him sympathetic, putting a true heart of compassion behind his rigorous suit of armor. From his kidnapped induction into the Spartan Program, to his intense training, to the survival of his medical and physical alterations, "John 115" watches as his classmates are slowly eliminated, and part of him dies with each one of them. In the end, his hardness as a leader is well founded. Nylund makes John 115 more human behind the mirrored visor than we ever imagined, and proves that heroes are forged from heart and flesh, not armor and weaponry. I am often moved to tears by powerful emotional writing, weeping for or with a character, but I never thought this story would reach those emotional peaks and valleys. I was wrong.
What do you read for pleasure?
I consume a good amount of magazine articles surrounding my automotive passions, my interests in sports, and pieces on the movie industry. (I write movie reviews for a website) However for fluff and fun, I enjoyed the early books of Janet Evanovichs' Stephanie Plum Series. I'm also still trying to make headway on the massive Outlander Series, but I also like to throw in a classic just for the change. I'm a sucker for a good love story, but I like it twined in with other compelling elements, and a splash of comedy never hurts.
Read more of this interview. 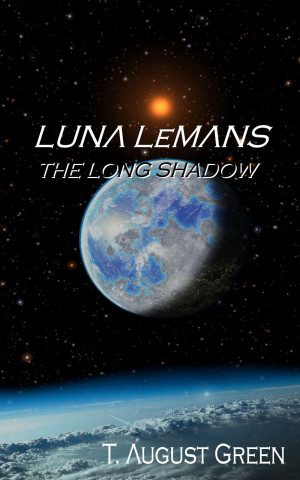 What happens when Top Gun meets Star Trek at the 24 Hours of Le Mans? You get hybrid-jet turbine machines where the term death-defying becomes a chilling reality. Terry Glenman is reaching for the Holy Grail on the Aurora Plains of Mars at Luna Le Mans 24 hours. Blast into 2286 as friendship and tragedy force scores to be settled on and off the track and the greatest race jumps to whole new level.

You have subscribed to alerts for T. August Green.

You have been added to T. August Green's favorite list.

You can also sign-up to receive email notifications whenever T. August Green releases a new book.