Where to find Erin MacMichael online

T'nari Renegades–Pleiadian Cycle by Erin MacMichael
The T'nari Renegades–Pleiadian Cycle tells the story of a race of violent reptilians causing havoc across the galaxy and the worlds struggling against their brutal oppression. To counter the reptilian disease, a group of brilliant tacticians bands together to take on the challenge of changing the nightmarish game. In this series, you'll encounter technologies based on blood and gold, psychic adepts, dreamwalkers, deathwalkers, and sigil masters, interdimensional transport and planetary portals, an ethereal geometric city, sentient crystalline starships, energetics directed by sound geometry and sexuality, and a renegade family of consciousness who slips and slides through time and physicality. The saga is told from multiple points of view, including the reptilian antagonists and the non-physical entities orchestrating the interplanetary drama. 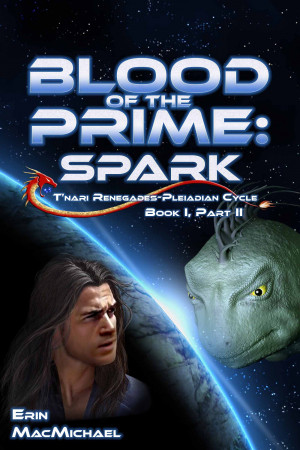 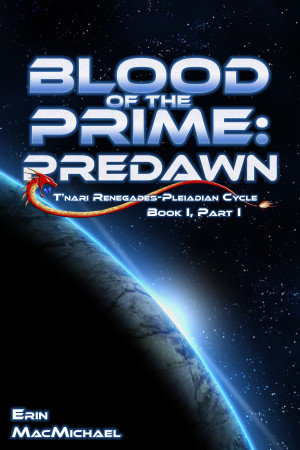 Blood of the Prime: Predawn by Erin MacMichael
Series: T'nari Renegades–Pleiadian Cycle, Book 1, Part 1. Price: $0.99 USD. Words: 197,740. Language: English. Published: December 21, 2018. Categories: Fiction » Science fiction » Space opera, Fiction » Visionary & metaphysical
The psychic starfleets of Alcyone and Maia join to defend against violent reptilians. After a devastating loss, pilot Rhys Talrésian finds himself targeted in his dreams by the invading warlord, and when the vicious attacks turn into strikes in Alcyone, Rhys sets out to find the elusive dreamwalker helping him ward off the reptile, sensing she is the key to unlocking his own hidden abilities. 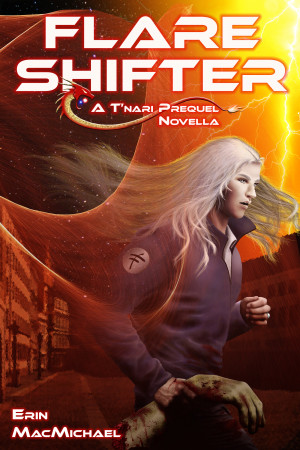 Flare Shifter (Prequel Novella) by Erin MacMichael
Series: T'nari Renegades–Pleiadian Cycle, Prequel 3. Price: $1.99 USD. Words: 34,840. Language: English. Published: May 5, 2017. Categories: Fiction » Science fiction » Space opera, Fiction » Science fiction » Adventure
Under tyrannical reptilian rule, Algolian shapeshifter Ryder Dundalk walks a precarious path in order to keep himself unnoticed and alive. The goldsmith’s only solace is his work and his carefully guarded privacy. But when a strange woman invades his sanctuary, his world is cracked open from the inside, challenging him to take dangerous and deadly risks for the sake of someone he loves. 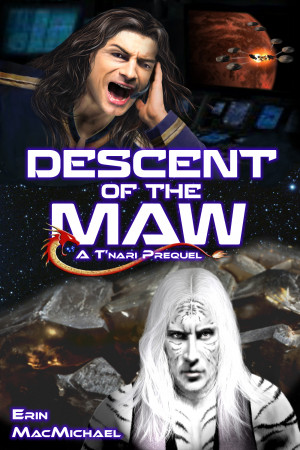 Descent of the Maw (Prequel) by Erin MacMichael
Series: T'nari Renegades–Pleiadian Cycle, Prequel 2. Price: $2.99 USD. Words: 66,580. Language: English. Published: May 5, 2017. Categories: Fiction » Science fiction » Space opera, Fiction » Science fiction » Adventure
This science fantasy prequel weaves together the desperate stories of a Pleiadian starship captain fighting to hold off invasion by reptilian Drahks and the young leader of the last surviving colony of Makhás masters in Sirius. Plagued with heartache and loss, the paths of these passionate leaders converge through mysterious circumstances, setting the stage for the entire epic series. 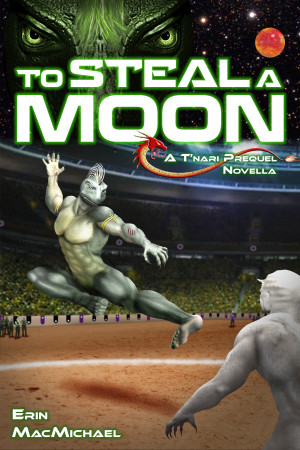 To Steal a Moon (Prequel Novella) by Erin MacMichael
Series: T'nari Renegades–Pleiadian Cycle, Prequel 1. Price: $1.99 USD. Words: 45,180. Language: English. Published: May 5, 2017. Categories: Fiction » Science fiction » Space opera, Fiction » Science fiction » Adventure
This prequel novella peers into the brutal world of the ruling reptilian classes in Draco as seen through the eyes of Bálok, Lord of Eltanin. Summoned to fight in Emperor Tashek’s deadly games, Bálok’s private agenda is to hunt down his most bitter enemy as well as carry off the Emperor’s prize, but his plans are thrown into chaos when the hated Lord of Rastaban saunters into the Imperial Arena.