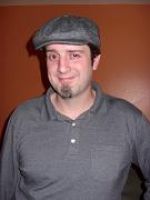 TOM DOOLAN was born in Walnut Creek, California, but lived most of his youth as a military dependant. At various stages in life he has lived in California, Georgia, Kansas, Missouri, Washington state, Texas, Louisiana, North Carolina, and Wisconsin. He has also lived in Germany, and graduated high school at Kadena AFB, Okinawa, Japan.

Tom served two, three-year enlistments in the US Army (with a brief break in between) as an Airborne Infantryman (11C) with twenty jumps, and is a Desert Storm veteran. He is a perpetual student, finally earning his Bachelor’s in History in 2010, and is currently studying for his Master’s.

Tom first became interested in writing as a teenager. He was (and still is) an avid player of Dungeons & Dragons, and this lead to his mother allowing him to watch the 1982 classic Conan the Barbarian at the age of thirteen. Shortly thereafter, Tom discovered the writings of Robert E. Howard, and has been a dedicated fan ever since.

Tom is an avid reader and movie buff, with tastes in both that run an extremely wide range. He is also the self-proclaimed “Ultimate Stallone Fan” (as a teenager he once answered 98 out of 100 Rocky trivia questions correctly…and he still remembers the two that he missed).

Tom currently lives in Madison, WI, with his wife, three kids, and three cats. He works for the state, but only to help pay the bills.

Where to find Tom Doolan online

You have subscribed to alerts for Tom Doolan.

You have been added to Tom Doolan's favorite list.

You can also sign-up to receive email notifications whenever Tom Doolan releases a new book.