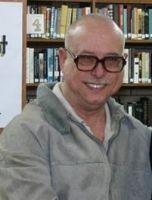 I was born July 26, 1940 in Seymour, Texas, located in West Texas . From an early age, I was a voracious reader, this most likely due to my mother reading exciting stories to me as a baby. By age 10, I had found all of the old classics. By age 12 I had found science fiction and was fascinated by the possibilities the sci-fi writers gave a young reader. As I became a teenager, I discovered Mickey Spillane and was hooked on the tough-guy private eye. It wasn't until the early 1960s that a friend turned me on to Edgar Rice Burroughs, and from there to Doc Savage and the many pulp heroes of the 1930s and 1940s. I loved to read, and eventually turned to writing.
My first fiction novel was Gryphon Double Novel #23, published by Gryphon Books (Gary Lovisi) in New York. This contained two short novels in my created series, The Masked Avenger: "Dark Streets of Doom" and "Crime's Last Stand." Gryphon Double Novel #23 was published in January 2001. Second would be "Jur: A Story of Pre-dawn Earth" with James Reasoner, published by Novel Books Inc. (NBI), July 3rd, 2002. My third novel is "Savage Land of Jur", published by NBI, November 28th, 2002.

My nonfiction books include the following: "Secret Agent X: A History" with Will Murray, 1980; "From Shadow to Superman", 1991; "The History of the Purple Wars" (as by Harrison Stievers), 1991; "The Green Ghost," 1991; "The Black Bat", 1990; "Dan Fowler: Ace of the G-Men", 1997; "The Original Masked Marvel, 1996. In addition , I have been involved in several other anthologies: Mike Cook's "Monthly Murders" in 1982; and Mike Cook's "Mystery, Detective, And Espionage Magazines" in 1983. I have assisted in several other anthologies without credit. The Masked Avenger, The Black Ghost, and Stuanofu are my creations, which I hope to see in anthologies some day. I have also written some short story fiction.

Where to find Tom Johnson online

You have subscribed to alerts for Tom Johnson.

You have been added to Tom Johnson's favorite list.

You can also sign-up to receive email notifications whenever Tom Johnson releases a new book.