Robert F. DeBurgh was born and grew up in the northeastern United States. From a very early age his entire life has been dedicated to aviation, from flying airplanes himself as a professional pilot to writing about the people who fly them.
His first recollection of flight is sitting on his aunt’s lap in the front seat of an open cockpit biplane flown by his uncle at the tender age of five. He learned to fly at age fifteen and obtained his commercial pilot and flight instructor certificates at eighteen
After completing his military service he returned to college and obtained graduate degrees in psychology, sociology and education and a master of arts in psychology, supporting himself and paying his tuition by doing what he loved best, flight instruction and writing about aviation. His writings have included aviation and sports car columns for several newspapers, many articles for American and foreign magazines, short stories in the realm of adventure, science fiction and fantasy and much poetry. He has also worked as associate editor for “American Roadracing Magazine.”
At the present time he writes articles for “Indian Aviation Magazine” and several US magazines and is the author of the widely acclaimed novels, Riders of the Wind and Winds of Fate. In each of these novels DeBurgh has woven a tale of high adventure set against an accurate background of actual historical events.
Robert DeBurgh has served as captain for three overseas airlines and has sojourned widely in the US, Canada, Central and South America, Asia and Africa. For the past seventeen years he has served his country in the capacity of a pilot examiner for the Federal Aviation Administration until his recent retirement. He still flies regularly and does some advanced flight instruction for airline transport pilots and flight instructors. He resides in the southeastern US with his wife of twenty-five years and his four dogs.
His new novel, The Winds of Kunlun Shan, due to be released in the autumn of 2011, is the third book in the Riders of the Wind series.

Where to find Robert DeBurgh online

Riders of the Wind is a fascinating tale of romance and adventure in the pioneering world of aviation. The story follows the lives of Charlie and Doretta Cross through the exciting skies of 1930s America, through the prohibition era, the formation of the infant airlines, and ultimately to the mystery of the Amazon jungles. This is the first novel of the epic “Riders of the Wind” series. 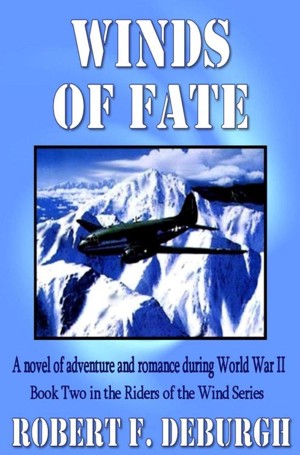 Winds of Fate is a dramatic story of wartime action, romance and adventure in the skies over China, Burma and India during WWII. It also takes the reader into the world of the civilian women pilots of the WAFS and the WASPs. It is a tale of danger, tragedy and love amid the furor of war.

You have subscribed to Smashwords Alerts new release notifications for Robert DeBurgh.

You have been added to Robert DeBurgh's favorite list.

You can also sign-up to receive email notifications whenever Robert DeBurgh releases a new book.