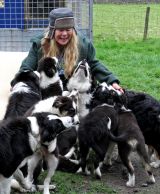 Viv Billingham is a shepherdess and author living in Southern Scotland. She has owned and trained Border collies all her working life, breeding the same line for over 40 years. A regular infusion of new blood has been introduced to maintain the attributes she admires e.g., 'Quiet power, initiative and intelligence' essential qualities required by hill dogs working out of sight.
Although herding ‘Outbye’ has always been the priority, Viv and her dogs have had success at trials, including selection for the Scottish International team in both Brace & Singles; appearing on ‘One Man and his Dog’ with Garry in the ’80s; winning the Scottish Nursery Final in 2009 with Tweedhope Fae and winning or being placed in numerous other trials over the years. She has also judged and given clinics in Europe and America.
Through all of this Viv managed to write about her life. In addition to One Woman and Her Dog, she is author of The Shepherd’s Wife, Tweedhope Sheepdogs and Whistle While You Work. Currently she is working on an adult fairy-tale Opus Anima about a shepherdess and her talking animals. All of these are expected to be published as ebooks.
Viv and her friend Fiona Limbrick's latest project is a series of DVDs about a litter of pups out of Tweedhope Fae by Linburn Laddie.
The first of these DVDS, entitled Frae the Cradle, introduces the Tweedhope pack, depicts adults & pups doing the job they were bred for and gives an insight into the area where the Border collie was greatly improved. The second and third DVDs, In Dog We Trust and A Dog For A' Seasons will follow the progress of the pups throughout training.
Viv is making the DVDs because of her concern regarding what she sees as 'A misunderstanding of the breed by some individuals':
“These dogs are important ambassadors to Britain. It is vital folk understand them and their history, that they respect and train them sympathetically. Visually The Scottish Borders are an extremely dramatic & beautiful area. I wish to promote them as 'The nearest place to heaven'.
Border collies kept the roof over my family's heads and the food on the table throughout my working life. I owe it to them to portray a simple method of schooling for work, with trialling as a bonus; sharing the knowledge I’ve learned through the years.
Herding has been bred into these remarkable canines: it’s simply a case of giving them plenty of time & freedom so that their inherent instincts are allowed to surface unimpeded.”

What occupies your time apart from writing
Born at the end of the 2nd world war - after a lifetime hill shepherding I and my dogs and pony Arabella are officially retired - however "You can't keep and old dog down". Altho' Arabella and I are getting long in the tooth and a bit arthriticky together with the collies we still go to sheep everyday and compete in TRIALS every weekend. We bide in the most beautiful place on God's earth - a wee shepherds cott on the banks of St. Mary's Loch in Yarrow, Scottish Borders. I arrived here seventeen years ago and believed I'd died and gone to heaven - and do you ken what? I DID!
Read more of this interview.

Where to find Viv Billingham online 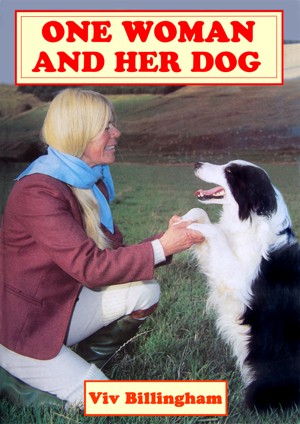 One Woman and Her Dog by Viv Billingham
Price: $4.99 USD. Words: 59,960. Language: British English. Published: January 11, 2014. Categories: Nonfiction » Biography » Autobiographies & Memoirs, Nonfiction » Science & Nature » Farming
Originally published in the 1980s, this popular and entertaining book describes Viv’s life as a shepherdess in the Cheviot Hills. Both humorous and serious, lively and reflective, energetic and calm, Viv presents the reader with a refreshing, diverting and informative narrative and cannot fail to delight all who read it.

You have subscribed to alerts for Viv Billingham.

You have been added to Viv Billingham's favorite list.

You can also sign-up to receive email notifications whenever Viv Billingham releases a new book.