MICHAEL COLLINS PIPER's life. . . in his own words . . .On May 16, 2006, during the Greg Szymanski show on the Republic Broadcasting Network (RBN), Piper commented.

. . . I have always been interested in politics since I was about seven or eight years old. I actually started out being interested in the history of the Civil War. From there it developed into a growing interest in U.S. political affairs in general.

During the Vietnam War as a child I was very much against the war because I was just instinctively antiwar. And then I eventually saw the effect that the war had on my older brother, who was actually drafted and went to Vietnam.

He is dead today. He survived the Vietnam War, but he never completely recovered from the physical and psychological impact of the war.

In any case, being very, very anti-war, I started studying U.S. foreign policy. By the time I was about 16 years old, I had pretty much come to the conclusion one of the real powder kegs for U.S. foreign policy was the Middle East. And that was precisely I determined because of all-out U.S. support for Israel. And there is no question but that there is all-out U.S. support for Israel.

As a consequence of that, I believe that we were victims of the 9-11 terrorist attacks. Whoever was responsible for 9-11, it was a direct outgrowth of the U.S. involvement in the Middle East, number one, involvement on behalf of Israel.

And number two, of course, we have found ourselves embroiled in this war in Iraq. And now if the Zionists and their controlled politicians like George W. Bush had their way, we will get into a war against Iran.

So, needless to say, as I have always said — I say it on my program all the time — I say it any time I am interviewed anywhere. The one thing which is consistent about U.S. Middle East policy is the fact that it is based on lies, bullying and double standards.

As a consequence of my interest in the Middle East, I obviously did a lot of reading on the topic. I discovered back in the mid to late 1980's that there was one aspect of U.S. Middle East policy that was hardly explored at all in most published material on the subject. That was the fact that John F. Kennedy was engaged in a secret behind the scenes war with Israel, over Israel's drive to build nuclear weapons of mass destruction.

The biographical summary from Final Judgment, Sixth Edition (2005) below picks up where the Szymanski interview left off:

THE AUTHOR THE ISRAELI LOBBY LOVES TO HATE...

There's no doubt about it — Michael Collins Piper, the author of Final Judgment, is one of the Israeli lobby's primary targets today. Repeatedly and bitterly attacked by propagandists for Israel, Piper is undaunted, despite the fact his life was publicly threatened by Irv Rubin, violent leader of the terrorist Jewish Defense League. Once, after discovering an illicit wiretap on his home telephone, Piper noted wryly, 'The Vatican didn't put it there."

In the style of his combative, colorful great-great-grandfather, famed bridge builder "Colonel" John Piper — surrogate father and early business partner of industrial giant Andrew Carnegie — the outspoken author relishes any opportunity to confront his many critics head-on, although generally they refuse to debate him. Like his ancestor, Michael Collins Piper is also a bridge builder in his own way . . .

In recent years, he has lectured across the globe in places as diverse as Abu Dhabi in the United Arab Emirates; Moscow, Russia; Kuala Lumpur, Malaysia; Tokyo, Japan and across Canada. Police-state-minded advocates of war and imperialism have been disturbed at Piper's energetic efforts to forge links of common understanding among peoples of all creeds and colors. Once described as "'The American Voltaire" — recalling the Enlightenment crusader against bigotry and tyranny — Michael Collins Piper is truly the author the Israeli lobby loves to hate ...

Widely known as a lover of dogs, cats and all animals and an unapologetic old-style American progressive in the LaFollette-Wheeler tradition, Piper considers the labels of "liberal" and "conservative" archaic, artificial and divisive, manipulative media buzzwords designed to suppress popular dissent and free inquiry. Once offered a lucrative assignment in a covert intelligence operation in Africa, Piper turned it down, preferring his independence — a position in keeping with his ethnic heritage: another of Piper's great-great-grandfathers was a full-blooded American Indian.

Twenty years before the major media discovered the "neo-conservative" cabal that pushed America into the Iraq war, Piper was reporting on their intrigues. In 2004, in The High Priests of War, he assembled a fascinating overview of their insidious record, the first book ever published on the subject. In his provocative 2005 work, The New Jerusalem, Piper confronted the controversial issue of Zionist power in America, a detailed exposition unlike any ever assembled by any modern author. Piper's authoritative lecture to the Zayed Centre, the Arab League think tank, on the topic of American media bias, has been distributed worldwide.

Sourcing much of his work from his own massive library of some 10,000 volumes, Piper writes for American Free Press, the Washington-based national weekly, and in the historical journal, The Barnes Review. One media critic hailed Piper as one of the top 25 best writers on the Internet today.

Throughout his career, Piper led the way on several major stories. In 1987, he was the first to expose the Justice Department frame-up of Pennsylvania State Treasurer Budd Dwyer that led to Dwyer's shocking public suicide. Piper was also the first to expose San Francisco-based Roy Bullock as an operative for the Anti-Defamation League (ADL), a conduit for Israel's Mossad, involved in illegal spying on American citizens, seven years before The New York Times acknowledged Bullock's ADL link. The ADL will never forgive Piper for his pivotal front-line role in unmasking Bullock.

Piper was the only journalist to assert — based on hard evidence — that the Oklahoma bombing was a Mossad "false flag" operation designed to implicate Saddam Hussein — a scheme derailed by U.S. investigators who rejected Israel's machinations, opting for a "lone nut" cover-up. Today, Piper's pioneering work on Israeli links to the 9-11 tragedy is echoed by truth seekers and, predictably, damned by defenders of Israel for its accuracy.

Michael Collins Piper's book My First Days In the White House: An unabashed, no-holds-barred memoir of the Second American Revolution and its aftermath (September 2008), earned the following praise by Ryu Ohta, Chairman of the Tokyo, Japan-based Society for the Critique of Contemporary Civilization, in its last section on page 220:

In a time of tsunamic ideological shifts, in which audacious propagandists are relentlessly engaged in frenzied efforts to rewrite the facts of history, to challenge these truth-twisters Michael Collins Piper arrives: the American Voltaire, an enlightened thinker and polemicist who has no fear of confronting harsh realities, doing so with elegance and verve. In recent years Piper has emerged as the unrivaled ambassador of the American nationalist movement to people all across the planet: from Moscow to Abu Dhabi to Kuala Lumpur and on to Tokyo and Toronto and Tehran. In no uncertain terms, he has issued a clarion call — a rallying cry — for all of us to join together, to reclaim our heritage and to sweep away the corruption of international capital and the consequent malign force that's come in its wake, driving our world to the brink of nuclear annihilation. Piper's message is loud and clear: Real Americans do not support the Zionist scheme to exploit America's military might to conquer the globe; that good people who oppose the Zionist imperium must put aside differences and close ranks, united for the final battle. Passionate, making no pretense of being without bias, Piper identifies and savages those who manifest attitudes of open hatred for nationalism and freedom. Having fashioned historical writing into an art form, Piper has few peers. Nor are there many who speak truth to power as Piper does so well.

Rabbi Abraham Cooper of the Simon Wiesenthal Center has said that, because Piper criticizes Israel, he is "anti-American." In fact, Piper's work proves precisely how pro-American he is.

A few summary comments about the works of Michael Collins Piper
by William B. Fox
publisher, Mikepiperreport.com

He relentlessly exposed forces of corruption and treason that threaten to utterly destroy this country from within. He honestly exposed terrible truths even when such truths are distasteful to the general public.

One proof of the excellence, depth, and honesty of his investigative journalism are the articles archived at this web site.

This man clearly deserves your attention.

Major News Events that the Media Did Not Tell You! - Mike Piper - 2008
A reporter with the American Free Press, the largest independent weekly paper in America, will share the major News Events of the Year that the Major Media did not tell you! Recorded at Freedom Law School's (http://LiveFreeNow.org) 2008 Justice, Peace, and Freedom Conference

The Real Deal Ep # 84 William Fox on the death of Michael Collins Piper, Plus Live JFK Group Talk
Former military intelligence officer William Fox, who maintains mikepiperreport.com, explains why Mike Piper's suspicious death in 2015 may have been the result of foul play by the "usual suspects" out to suppress the truth in America. 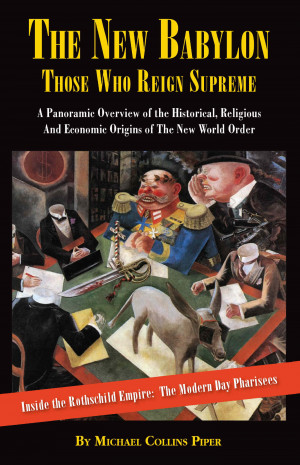 The New Babylon: Those Who Reign Supreme by Michael Collins Piper
Price: $4.99 USD. Words: 117,030. Language: American English. Published: June 23, 2017. Categories: Nonfiction » Politics & Current Affairs » History, Nonfiction » History » Jewish
Although there has been much written about the New World Order and the Rothschild Empire, this is the first book ever to document, from the beginning, the truth about this worldwide geopolitical phenomenon, explaining in the long-suppressed origins of the New World Order and the global engine of tyranny rooted in the financial empire of the Rothschild Dynasty. 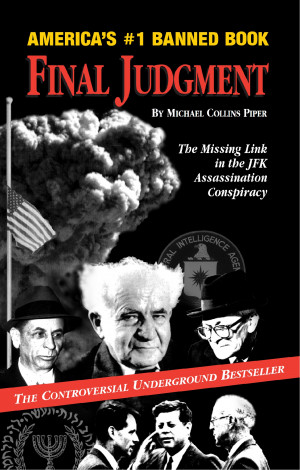 You have subscribed to alerts for Michael Collins Piper.

You have been added to Michael Collins Piper's favorite list.

You can also sign-up to receive email notifications whenever Michael Collins Piper releases a new book.