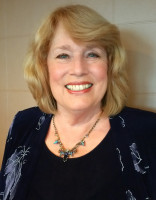 You might say that Pat Dunlap Evans couldn't get off IH-35, so she moved to Hawaii.

Pat was born in Michigan but at age two, her family moved to Texas, where she lived in San Antonio for six years, then later Dallas. Both are major cities along the IH-35 route. She was a lieutenant in the Golden Debs at South Oak Cliff High School and an honors scholarship recipient at Southern Methodist University in Dallas.

An early marriage, a major move via IH-35 to the Kansas City area, and the birth of three children plunged Pat into the world of motherhood and life as an NFL wife. Pat's first husband of 17 years had a long career as quarterback for the Kansas City Chiefs and then a few seasons with the Minnesota Vikings.

After Pat’s children were old enough for her to return to college, she completed her bachelor's and master's degrees in English at the University of Missouri, Kansas City. The post-grad degree offered an emphasis in creative writing, a path Pat followed toward novel writing.

TO LEAVE A MEMORY: a warm coming together; OUT AND IN: a mystery-thriller; and BACKSTORY: behind the scenes of a famous film-thriller are Pat’s three published titles. She used her experiences as an NFL wife as background for OUT AND IN and in BACKSTORY. A sequel to OUT AND IN is in the works.

After a distressing divorce, Pat made her way as a single mom through a long career in advertising and marketing, with positions in Dallas and Austin. A second marriage to Dr. Bill Evans of Austin enabled Pat to quit the day job and focus on her true love of creative writing.

To fulfill a bucket-list dream, Pat and Bill made the leap in 2020 to the Big Island of Hawaii, where there is no IH-35. The pair enjoy golf, sunsets, snorkeling, exploring, and visits from family and mainland friends who, like Pat and Bill, relish Hawaii’s culture, scenery, and weather.

Please follow Pat on Amazon and Goodreads to see news and opportunities for giveaways.

You have subscribed to Smashwords Alerts new release notifications for Pat Dunlap Evans.

You have been added to Pat Dunlap Evans's favorite list.

You can also sign-up to receive email notifications whenever Pat Dunlap Evans releases a new book.