At age 13 or 14, Oney’s parents sent him to Newark, New Jersey, to attend a “select school,” where he obtained a better education than most of his peers. While there, he lived with his “benefactor,” Robert F. Ballantine. (Ballantine, mentioned often in Oney’s diaries, belonged to the family that founded and operated the Ballantine breweries in Newark and was related to the Sweets through the DeWitt family in Nyack, New York.)

When Oney completed his schooling, he went to work for a wholesale establishment in New York City. However, the Confederate blockade of Southern ports put Oney’s employer out of business.

On September 4, 1861, at age 19, he enlisted as a private in the 1st Pennsylvania Light Artillery,
43rd Pennsylvania Volunteers (14th Reserves), Battery F (Ricketts’ Battery) and served until the end of the war, mustering out with the battery on June 10, 1865.

His regiment joined the Army of the Potomac to protect the nation’s capital, and he fought in most of the major battles in Virginia, Maryland, and Pennsylvania, including Antietam, Fredericksburg, Chancellorsville, Gettysburg, Wilderness, Spotsylvania Court House, Cold Harbor, Petersburg, and Appomattox.

Oney became a partner of Josiah Phelps, who had opened the first grocery store in Hampton, and later Oney bought out Phelps. Oney also operated a candy store.

In 1912, at the age of 71, Oney moved to Southern California to be nearer his children. His war wound followed him, however, and the complications forced him to walk with a cane. When gangrene set in, he had to have the leg amputated below the knee.

His previously unpublished letters and diaries offer a unique glimpse of the American Civil War from the view of a private simply trying to survive a deadly conflagration in which one in five combatants perished. 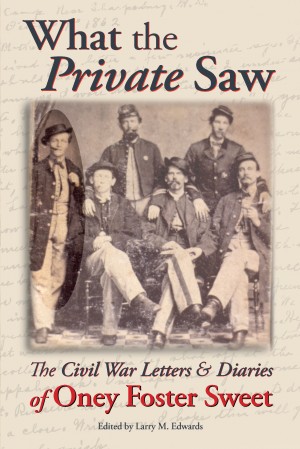 You have subscribed to alerts for Oney Foster Sweet.

You have been added to Oney Foster Sweet's favorite list.

You can also sign-up to receive email notifications whenever Oney Foster Sweet releases a new book.