William Law was born in 1686, at King's Cliffe, England. He graduated from Emmanuel College in Cambridge with a Master of Arts degree in 1712 and was ordained in the Church of England. When Queen Anne died and the German George I became the new ruler of England, William refused to take the oath of allegiance, and so was deprived of his Fellowship and of all hope of a career in the Church. He became a private tutor for ten years, and soon began writing.

After his time of being a private tutor, Law returned to his hometown of King’s Cliffe, where he died in 1761. He lived a somewhat secluded life – writing, spending much time with God, and giving away any extra income to help others, setting a good example of practicing what he preached. William Law was a sincere and godly man who read the Scriptures and lived them as he understood them; and he expected all Christians to do the same.

His most famous book, A Serious Call to a Devout and Holy Life, was published in 1729. This book was influential in the lives of many Christians, including John and Charles Wesley, George Whitefield, Dr. Samuel Johnson, Edward Gibbon, Andrew Murray, and William Wilberforce. 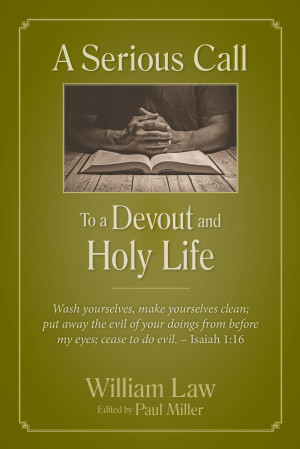 A Serious Call to a Devout and Holy Life by William Law
Price: Free! Words: 138,460. Language: English. Published: December 1, 2018 by Aneko Press. Categories: Nonfiction » Religion & Spirituality » Christian Life / Spiritual Growth
The questions which William Law urges upon the reader are vital, “Are you living the Christian life as it ought to be lived? Do you believe the Bible? Are you a true follower of Jesus or not?”

You have subscribed to alerts for William Law.

You have been added to William Law's favorite list.

You can also sign-up to receive email notifications whenever William Law releases a new book.