Roosevelt Williams was born in Harlem Florida, an African American enclave outside of Clewiston, in 1944. He is one of ten children born to Harlie and Ruth Williams.. He graduated from Florida A & M University with honors in 1966 and obtained an MBA from Michigan State University in 1986.

Beginning in 1967 he was a manager and executive with New York Telephone, Michigan Bell and AT&T for 21 years, with most success coming in the area of managerial supervision, and organizational planning and effectiveness. He founded his own company in 1989 that provided information system applications development, installation and support; computer skills classroom training; and offered management skills training and consulting for educators.

He began working as a substitute teacher in Detroit Public Schools in 1995, and as a certificated teacher in 1996. After being rated as a satisfactory teacher for five years, Mr. Williams was notified that his performance was deficient in October 2001 and notified that he was still deficient in April 2002 and subsequently fired.

This book is Mr. Williams appeal to the public, an attempt to expose how the system is failing Detroit students by design, and proposes how the situation may be remedied.

Mr. Williams is a lifelong Christian who was ordained as a minister of the Gospel in 1996, and served as pastor of Christian Fellowship Non-Denominational Church from 1996 through 2004. He served as pastor of Greater Olivet Baptist Church from 2005 until he retired at the end of 2010. Reverend Williams viewed his battles with the Detroit Schools as a matter of righteousness, and says he felt compelled by his faith to fight the good fight. Bringing his case before the public is the latest step in that fight.

Where to find Roosevelt Williams online 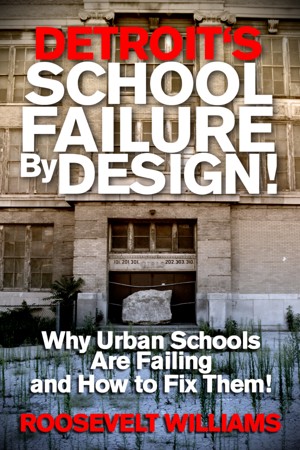 Detroit's School Failure By Design! Why Urban Schools Are Failing And How To Fix Them! by Roosevelt Williams
Price: $0.99 USD. Words: 158,780. Language: English. Published: February 15, 2012. Categories: Nonfiction » Education & Study Guides » Administration / general
This book explains how Detroit earned its reputation as the worst public school system in the country. It is the story of one man’s attempt to teach his students traditional history in a Detroit classroom, and the District’s determination to stop him. Detroit officials disapproved of students reading the textbook, preparing outlines, lecturing and requiring students to work to pass the class.

You have subscribed to alerts for Roosevelt Williams.

You have been added to Roosevelt Williams's favorite list.

You can also sign-up to receive email notifications whenever Roosevelt Williams releases a new book.