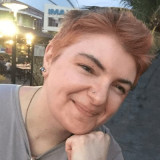 Andrea Emanuela Bossoni. Born in Milan, Italy, on July 11th, 1974.
Jewish, born between two cultures, Andrea has a great mind-openness.
She attends lower and higher secondary school in Milan, Italy.
She gets a General Certificate of Education in tourism as Tour Operator in 1995. In 1996, after passing the examination test in three sections, she enters her name and starts attending a two-year professional course at the Film, TV and New Media Professional School of Milan, Italy. She gets a post-diploma degree as director assistant/production assistant in 1997.
She’s scriptwriter since 1995, film director since 2002. She wrote, directed, sometimes edited and produced all her audiovisual works.
In 1998, she starts working as a second assistant director during the theatrical rehearsals of Mr. Moni Ovadia and TheaterOrchestra’s “Il Crepuscolo delle Madri” at the Piccolo Teatro of Milan.
Several works as freelance between France and Italy follow. In France, she works as an assistant director and scriptwriter. She is also one of the organization members of a film festival in Rennes, Brittany, France.
She works as a scriptwriter from 1995. In 2002, she becomes a professional independent film director. Her first short film written, directed, self-financed and produced “Ricordi Metropolitani” (“Souvenirs Urbains”, “City Recollections”, Betacam SP, 29’, colour - b/w, Italy, broadcasted at the TSR 2, second channel of Télévision Suisse Romande within the TV programme “Signes” in January 2003) wins two awards, one in Brussels in 2002 and the second one in Milan in 2005.
In 2003 / 2004, she writes, co-directs and co-edits her second independent short film, “Le Rêve d’Un Jour” (original title in French), a tribute to Chaplin and to the theatre poetics within a professional editing course (analogical and digital techniques) at the CFTA Institute in Milan.
In 2007, after one year of pre-production and development, she writes, directs and produces her third short film “La Voce di Barbara” (“Barbara’s Voice”) about dance and deafness where she reverses social roles showing that handicap is very often just a mental, social or cultural limit.
“La Voce di Barbara” wins an award in November 2008 as “Best Document” at the 35th Edition of the International Independent Film Festival of Brussels, Belgium.
Between August and September 2008, she writes a novel “Le Crisalidi di Lubiana” printed and published by Zerounoundici Edizioni getting a good review in terms of audience and critics.
In May-June 2009, she directs and edits her first art video about the artworks of a young talented Macedonian artist, Nevenka Zdraveva, “A Look Beyond - A Journey Into Gala’s Vision” for an art event in parallel of Biennale di Venezia 2009.
In 2011, she writes, directs and edits “My New Life In Skopje” (June 2011), a docu-fiction in two versions. She also engages in developing a challenging cross-cultural project, “Le Match de Ma Vie” (“The Match of My Life”), her first feature film project about sports, friendship and the courage to face the loss and getting back to life again.
In 2012, she writes, directs and edits “The Bridge of Memory” (short film), “It's A Movie Business” (short film) and “To Sing Her Life” (documentary) in Skopje, North Macedonia.
In 2012, she graduates and gets a BA in FIlm and TV Directing at ESRA University for Audiovisual arts in Skopje, North Macedonia.
In 2013, she writes and publishes her second novel, “The Next Chance”, a short story within a young talented new authors short stories collection published in Rome, Italy.
In 2016, she writes, directs and produces “Second Chance”, a fiction short film, a cross-cultural project between France and North Macedonia, spoken in two languages, subtitled in six languages, released in 2017, winner of three international awards and selected in twelve official competitions in several renowned international film festivals.
She has written a breathtaking feature film script, “Three Flames Dancing in the Dazzling Light” and published her third book, a nonfiction book in English, “How to Thrive as an Empath”.
For the Italian market, a fourth book has been published, "La Danza della Vita".

Big challenges and a fiery passion move her inner engine to work smart and get excellent results besides growing as an artist and a human being.

Shorts films available on Youtube and Vimeo, documentary available with a private link.

FILM PROJECTS AND NOVELS (in development)

“A Glance Beyond The Fog” (Feature film script – Fiction) 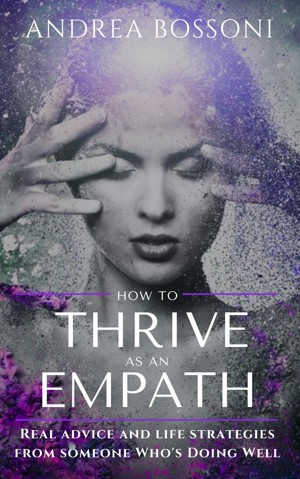 How to Thrive as an Empath by Andrea Bossoni
Price: $6.99 USD. Words: 51,330. Language: English. Published: April 22, 2022. Categories: Nonfiction » Inspiration » Spiritual inspiration, Nonfiction » Self-improvement » Personal Growth / General
How to Thrive as an Empath is a self-help book for empaths who need to know how to use their gifts in order to empower themselves and grow. Being an empath is a curse, a challenge, and, ultimately, a blessing. In a powerful guide rich with inspiration and sharp insights, Andrea Bossoni perfectly depicts it throughout 16 enlightening chapters.

You have subscribed to Smashwords Alerts new release notifications for Andrea Bossoni.

You have been added to Andrea Bossoni's favorite list.

You can also sign-up to receive email notifications whenever Andrea Bossoni releases a new book.