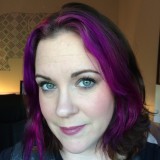 My name is Sarah. I live in British Columbia, Canada with my husband and son.

I have always been a voracious reader. I taught myself to read before I was four. By the time I entered kindergarten, I was reading short novels. I quickly progressed to full novels, and have never looked back.

My favourite genres are science fiction and fantasy, but I will read most anything. I have at one point or another read almost every genre possible. I have discovered that there are a few things that I do not like to read. I prefer not to read overly graphic romance scenes, religious teachings, or a lot of cursing. Other than that, it's an open canvas.

You have subscribed to alerts for Sarah (Workaday Reads).

You have been added to Sarah (Workaday Reads)'s favorite list.

You can also sign-up to receive email notifications whenever Sarah (Workaday Reads) releases a new book.