Ozan Adam studied art and cinema at Bard College, attended The New School University for his MA. He worked as an independent artist and as a professional in film production, advertising, commercials, media, stage construction and design industries in New York. His body of diverse artwork consists of text; design, illustration, painting, sculpture, animation, film, video and installations which have been exhibited in solo and collective exhibitions around the world at many prestigious international exhibitions, biennials, museums, galleries and festivals around the world.

His film “Zymotic-Amaurosis” was awarded with the Special Jury Award in the 14th International Ankara Film Festival and another film of his titled “The Two Names of A Testimony About The Execution of A Happening and A Suitcase Full of Broken Records“ was awarded as the Best Experimental Film in the 17th International Ankara Film Festival. He taught many courses and lectures at many universities and has been invited by universities and institutions such as Middle Eastern Technical University, Bosphorus University, The Netherlands Institute of Higher Education, Aksanat Art Foundation and The Bauhaus Foundation in Germany for workshops, conferences and seminars. He has taught graduate and undergraduate courses including Introduction to Film & TV, Video Production, Advanced Lighting, Sound in Cinema & TV, Experimental Cinema, Music Video Production, Sound in Cinema & TV, graduate level Documentary courses and supervised projects in Istanbul since 2001. He directed commercials, advertisement campaigns and music videos. He has also been a jury member for the award juries of film festivals. Many of his artworks and films have been selected, awarded and presented by internationally acclaimed festivals, galleries and museums.

His feature film "For The Blinds" won the Special Jury Award at the Indian Cine Festival in Mumbai and it received excellent reviews. As the director of the first internationally awarded Turkish science fiction feature film that is not a comedy, an animation, a cult film or a remake he marks his place in the history of Turkish Cinema.

Where to find Ozan Adam online 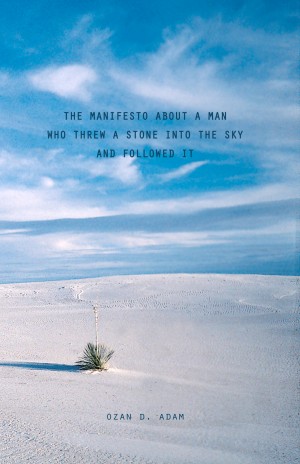 THE MANIFESTO ABOUT A MAN WHO THREW A STONE INTO THE SKY AND FOLLOWED IT by Ozan Adam
Price: $15.00 USD. Words: 34,090. Language: English. Published: April 23, 2016. Categories: Fiction » Fantasy » Contemporary
The book is about the thrilling journey of a man in an unusual place and time where everything seems like a post apocalyptic science fiction setting.

You have subscribed to alerts for Ozan Adam.

You have been added to Ozan Adam's favorite list.

You can also sign-up to receive email notifications whenever Ozan Adam releases a new book.