From an early age I developed a strange affinity for poetry after hearing Edgar Allen Poe’s famous poem ‘The Raven’. Immediately I tried writing my own, I was fascinated by words in rhyme and their meaning. My mind was set ablaze by ideas and thoughts, unfortunately I wasn’t able to annunciate or project those ideas and thoughts in a manner synonymous with poetry. My love for the craft kept me writing along with the countless praises I got from friends who read my work. Most of my early work, understandably was laughed at. All I wanted to do really was construct a literary masterpiece, little did I know that even at a young age you have many doubters, most of whom are closer to home than you think. My simple mind plodded on and I kepts writing in an endeavour that if I kept on scribing then sooner or later I would have a eureka moment. There’s a widely accepted belief that if you practice a craft for more than 10,000 hours than you have become professional.

Such understandings for the most part are beyond me however I have no doubt I have clocked some mileage. As with all enquiring minds writing poetry wasn’t filling the void as it once was, I began writing short stories in times of inactivity to pass the time. My poetry had become better but not to the point where I could be featured in a magazine or make any publicity from it. I continued writing poetry and expanding to stories. The short stories, in my own opinion were mostly rubbish, pointless drivel my adolescent mind could conjure. But when did the sculptor ever throw away a piece of clay, he merely remoulded it. In my mind the story was brilliant, on paper it was pointless and lost nearly all its flair. Something always gets lost in translations, you will find in the world of writing but the story was powerful on the brain.

My preliminary understanding of writing for the most part was on track. The more I wrote and imagined the better I became, not just with articulation but presentation. I carried on with poetry but created my book Memoirs of the Damned from the short stories I had written, I remoulded the stories and improved upon words and dynamics. I acquired a friend, a poet and writer himself, who helped in the mentoring process. It was he who opened my mind to the vast scape that is poetry. There were others like me and I would find them, meet with them and become more than I ever was. I attended writing workshops in my spare time and began taking part in poetry festivals. These people, creative people and artists alike, helped me become a better person. You can never have too many friends, believe me folks and who better than someone who is like you?

Now my primary focus is to become an established author, but also indulge in the vast foray that is writing. Not writing styles but writing itself, I cannot ignore poetry as it is the keystone of my writing desire but I am considering expansion into playwriting too. I may not have everyone’s faith but I am not looking for approval. Simply I want to go beyond myself and find other wonders that could be out there. If you consider the world of literature to be the Earth, then I want to go globe trekking. I am looking forward to becoming a prominent part of the literary community and I am excited about what the future holds for me.

What is the greatest joy of writing for you?
I don't know about other people, I love people's feedback because it helps me write future works. But there is one thing I love above all else. This might sound self-obsessed but I love how even I don't know what's going to happen in the story whilst I'm writing. As though, I'm watching my mind tell me what's going to happen next. The fabric of the story is interwoven in the words, and sometimes those words steer the story more than my plan does. I may plan something but my mind has other ideas. Its that uncertainty I love most about writing.
What book marketing techniques have been most effective for you?
I'd say Fiverr, I mean you can always do the whole social media thing with friends and family but I've found majority of the time, not many people care. Go on fiverr, It'll cost 5 dollars and you can advertise to thousands of people. NOW - here's the risk, alot of the sellers use bots and social media posting which won't really do anything for you. So shop around, read comments and see which seller is the best right now - my opinion (remember, i said opinion) is BKnights, have a look for yourself.
Read more of this interview.

Where to find Yas online 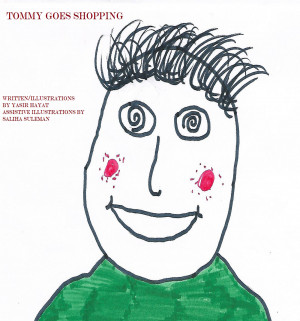 Tommy goes shopping by Yas
Price: Free! Words: 540. Language: American English. Published: March 11, 2017. Categories: Fiction » Children’s books » Poetry, Fiction » Children’s books » Imagination & Play
Tommy goes on a shopping trip with his mom, they're both going on the weekly grocery run to Tommy's favorite place - the Mega-Mart. A wonderland of toys, games, candy and food. Tommy sees the world from a unique perspective and whilst he's out and about sees many things. Follow Tommy on this new adventure and learn with him. 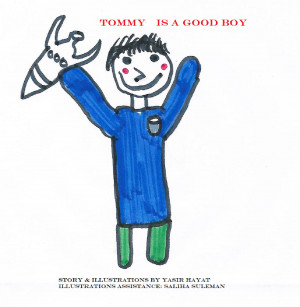 Tommy is a good boy by Yas
Price: Free! Words: 530. Language: English. Published: February 27, 2017. Categories: Fiction » Children’s books » Nursery Rhymes, Fiction » Children’s books » Imagination & Play
Tommy is a boy like any other, he likes to play, he likes to learn new things. Like any boy, he has fun, he makes mistakes, he learns and see the world from a unique perspective. Come join Tommy, on his adventures and see what you can learn from Tommy too.

You have subscribed to alerts for Yas.

You can also sign-up to receive email notifications whenever Yas releases a new book.