Arran Bhansal is my pen name as the author of Infertility, Infidelity, and Insanity. I'm a storyteller, both short and long. I first began writing my novel during the spring of May 2012 while sitting in a conference in Edinburgh. Losing concentration with the subjects being discussed, I became engrossed in telling the events that affected my life the previous year.

For anyone who has ever written a novel, they can understand how it can be a thankless task. The love of writing makes you want to start, but along the way you really begin to hate the process. You even promise to remind yourself never to do it again. Yet, finally when it’s all done, you can’t beat that moment of pure satisfaction. Then you think about writing the next one!

What are you working on next?
I'm currently working on the sequel to my first novel Infertility, Infidelity, and Insanity. The book will be based in central London and follows the events in the life of Arran Bhansal. Traumatised because of his past, he seeks to find himself again. Along the way he meets Amber, and she reminds him what it feels to be alive again. The second book has been tentatively titled 'The Importance of Letting Go'.
Who are your favorite authors?
There are so many!! My ultimate favourite has to be an Indian author called Ashok Banker. I love how he managed to bring mythical tales to life. He's also brave in tackling characters that most authors wouldn't dare to.

Where to find Arran Bhansal online 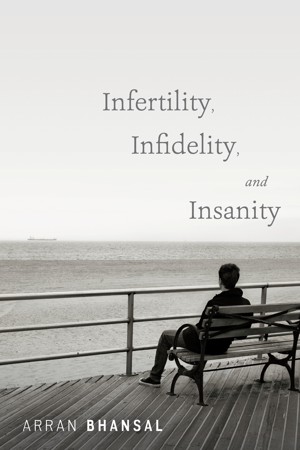 Infertility, Infidelity, and Insanity by Arran Bhansal
Price: $2.99 USD. Words: 157,970. Language: British English. Published: March 21, 2014. Categories: Fiction » Themes & motifs » Family sagas
Arran, thirty-four, married, British Indian, father, and depressed. He arranges to meet Judith; a counsellor he hopes will help him make sense of things. He describes his disastrous marriage to Becky and the IVF cycles they had to endure. He reveals how he met Lauren, and began a passionate affair. His obsession with Lauren threatens to destroy his life and those closest to him.

You have subscribed to alerts for Arran Bhansal.

You have been added to Arran Bhansal's favorite list.

You can also sign-up to receive email notifications whenever Arran Bhansal releases a new book.