Al Kustanowitz founded Jewish Humor Central, an internet blog, in 2009, to bring a daily dose of fun and merriment to readers who would otherwise start the day reading news that is often drab, dreary, and depressing. Each day thousands of subscribers in 160 countries get it by email, Facebook, and Twitter. Subscriptions are free.

The blog posts vary from day to day, and include jokes, satire, books, music, films, videos, food, unbelievable but true news items, and anything that brings a grin, chuckle, laugh, guffaw, or just a warm feeling to readers. Most are new, and some are classics.

A long-term devotee of Jewish humor, Al has collected it even before there was an internet. For the last 25 years he has been editor and publisher of The Kustanowitz Kronikle, originally a family newsletter that went public when the Purim editions became too popular to keep private. Now they're all available on the internet.

In 2012, Al wrote a series of seven interactive eBooks with the series title Jewish Humor on Your Desktop. The seven volumes are subtitled:

All seven volumes are included in Jewish Humor on Your Desktop: The Complete Collection.

In 2013, Al will be delivering lectures on Jewish humor at synagogues, Jewish Community Centers, and other locations. If you are interested in booking a presentation on the general topic of Jewish Humor on Your Desktop or on any of the topics covered in the volumes of the series, you can reach him by e-mail at akustan@gmail.com

Where to find Al Kustanowitz online 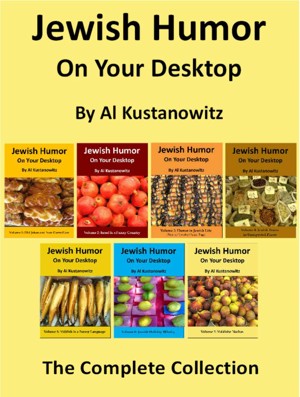 Jewish Humor on Your Desktop: The Complete Collection by Al Kustanowitz
Price: $9.99 USD. Words: 138,500. Language: American English. Published: November 20, 2012. Categories: Nonfiction » Religion & Spirituality » Judaism, Nonfiction » History » Jewish
Jewish Humor on Your Desktop is a series of seven interactive eBooks that bring hundreds of funny Jewish videos and anecdotes to your favorite screen -- desktop or laptop computer, Kindle, iPad, iPhone, Android phone or tablet. Each video is introduced with a short written commentary explaining its back story. This anthology includes the complete contents of all seven books in the series.

You have subscribed to alerts for Al Kustanowitz.

You have been added to Al Kustanowitz's favorite list.

You can also sign-up to receive email notifications whenever Al Kustanowitz releases a new book.