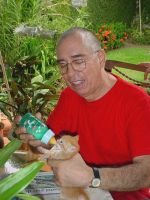 Alex Canton-Dutari lives in Panama City, Panama. Holds a PhD in clinical psychology, now retired and a widower. He devotes most of his time to writing short novels plus helping with his six grandchildren.

Where to find Alex Canton-Dutari online

You have subscribed to alerts for Alex Canton-Dutari.

You have been added to Alex Canton-Dutari's favorite list.

You can also sign-up to receive email notifications whenever Alex Canton-Dutari releases a new book.