I'm Alex, 26, from Preston, Lancashire.
Personality/physicality wise I'm a cross between Mr Bean and Sheldon Cooper, from The Big Bang Theory.
Cheap White Meat is my first novel published on Smashwords. My next, For Everything a Reason, will be published in early 2013.
Anything else you want to know, email me at alexflynnauthor@yahoo.com

Where to find Alex Flynn online 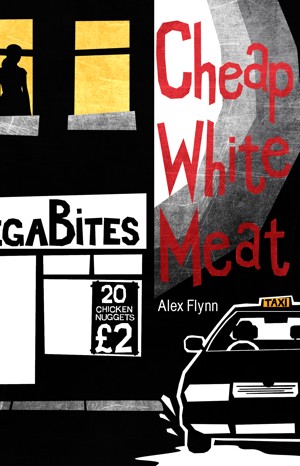 Cheap White Meat by Alex Flynn
Price: Free! Words: 72,560. Language: English. Published: November 26, 2012. Categories: Fiction » Young adult or teen » Social Issues, Fiction » Plays & Screenplays » European
NaNoWriMo 2012 book. Last updated 2012-11-26 04:13:18
Goal reached!
After living in care most of her life, 15 year-old Jennifer finds herself being easy prey for a local paedophile group. When the police start to investigate potential abuse against Jennifer she doesn’t want to co-operate. However, when she meets Jack, a new carer, she decides to speak out. Not for herself, but for the other girls who have been victims and are too afraid to come forward.

You have subscribed to alerts for Alex Flynn.

You have been added to Alex Flynn's favorite list.

You can also sign-up to receive email notifications whenever Alex Flynn releases a new book.