Born in Burnaby, British Columbia, Aly Madhavji completed a Bachelor of Commerce at the University of Toronto in June 2012. In his first year, Aly served on the Board of Directors of the Student Union representing the voice of all first-year students. He was instrumental in the introduction of a campus-wide pre-exam study break by involving over 1,800 students, faculty, and staff. Aly coordinated two successful referendums that annually raise $12,500 and $25,000 to support the campus food bank and to help student refugees in the pursuit of Canadian higher-education respectively. In his second year, Aly was a residence Don for upper-year students. He spearheaded a number of significant improvements by gathering suggestions from students across campus. He was named the Residence Ambassador of the Year. In his third year, Aly was the President of Residence Council, a student government, which was known as one of the most active and successful student groups on campus. Aly was a Peer Academic Leader for first generation first-year students to ease their transition into university. He was recognized with the Top Residence Student of the Year award. In his fourth year, Aly was an elected Governor of the University of Toronto representing over 42,000 undergraduate students where he was a member of the Executive Committee and Academic Board of the institution. He was a teaching assistant for two courses, Management in a Changing Environment and Operations Management. He held part-time positions as a Microsoft Campus Leader, Awards Agent for CampusPerks, and as a Bloomberg Ambassador to help secure students internships and full-time jobs. Aly was the Executive Director of Residence Council where he strategically came up with the idea to secure $10,000 of financial need based bursaries for Residence students. Aly was a Books with Wings Coordinator with the University of Toronto International Health Program where he raised 312 university textbooks, with an estimated value of $15,000, for students in rural and impoverished areas around the world. Aly was awarded the Principals Involvement award and the Gordon Cressy Student Leadership award. Throughout his four years, Aly served on the highest governing body of the University of Toronto Mississauga along with two terms on its Academic Board.

Aly served for one year in the Royal Canadian Air Force (RCAF) with the rank of Officer Cadet. He is a recipient of the Royal Canadian Legion Medal of Excellence. Aly holds the Chartered Investment Manager (CIM®) designation which he earned through the Canadian Securities Institute and is pursuing his Chartered Professional Accountant (CPA), Chartered Accountant (CA), and Certified Management Accountant (CMA) designations with PwC. Since graduating in June 2012, Aly played an active role to bring a Co-Curricular Record to the University of Toronto, which was introduced in September 2013, to officially recognize the extra-curricular activities of students. Aly served as the VP Strategy and Chair of Access Empowerment Council, a not-for-profit organization created to inspire disengaged and marginalized youth and engage isolated elderly around the globe. He volunteers as a Civilian Instructor with the Royal Regiment of Canada Army Cadet Corps. Aly serves on the Board of Directors of the University of Toronto Mississauga Alumni Association and the College of Electors of the University of Toronto. He is also an Advisory Board Member for Advantage Mississauga, an innovative initiative aiming to bridge the gap between higher education and the business sector. He is a Senior Associate in the Assurance group at PwC with clients in private equity, real estate, natural resources, structured finance, insurance, broker dealers and pension plans. As the author of the #1 College book on Amazon, Aly continues to energize and develop thousands of current and aspiring University and College students through speaking engagements and mentorship. He continues to be a strategic volunteer in the community and serves on the Board of Directors of various not-for-profit and charitable organizations. Aly has been featured in The Medium and The Varsity newspapers, the Ismaili Magazine, Mississauga Magazine, and University of Toronto Press. Aly loves to spend his free time outdoors, playing sports, and maintaining a healthy lifestyle.

How would you describe your years in university? - The Medium
Aly Madhavji: I definitely loved it. It was one of the best experiences of my life.

I did poorly in my classes [in] first year, but I learned to get organized and prioritize, so over time I could still be involved around campus, yet focused. I got involved with student government, my residence housing, meeting new people, and it all contributed to my personal development.I was able to work for students and [participate in] social as well as academic activities.

The Medium Newspaper Interview: http://www.succeedinuniversity.com/index.php/uoft-your-guide-to-success/pages/view/interview-with-the-author#.UusDlPldV8E
Website: www.SucceedinUniversity.com
How did you manage all of that and good grades? What was something you used to separate the personal growth from the academic? - The Medium
AM: For me, the big thing was learning to be organized and I talked about it in the guide as well. I think any student can do it. I’m an ordinary student who made all the ordinary mistakes. What I think I picked up a little quicker was to stay organized and trying to push myself—one step each time—further. I used resources like my phone calendars with due dates and reminders to finish my assignments before deadlines. If you can do that, then you can also plan out volunteering and work, if you’re doing that part-time. The important thing is definitely to organize oneself and be efficient.

Where to find Aly Madhavji online

The Medium Newspaper Interview w/ Aly Madhavji
The Medium Newspaper Interview with Aly Madhavji on his new book "Your Guide to Succeed in University" - Rated the #1 College book on Amazon, #1 Hottest Study Aid in Canada, #2 in the US, and the #3 Hottest Education book in Canada (Source: App Annie Rankings). It is widely available on Amazon, iBooks, Google Play, Chapters Indigo, Barnes & Noble, Kobo, and more. Website for your Free copy of "Your Guide to Succeed in University" - http://www.SucceedinUniversity.com 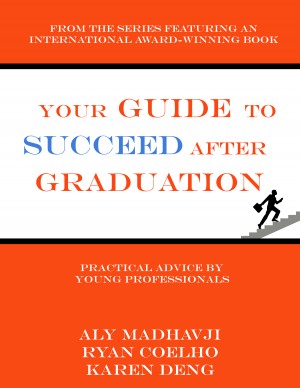 The goal of Your Guide to Succeed After Graduation is to help new graduates become confident in developing successful careers, addressing work-life balance, and other next steps after graduation. With the advice of experts, and illustrated by personal experiences, This guide tackles topics such as job searching, career strategies, mental health, and community involvemement. 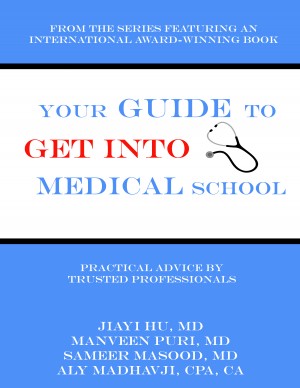 Are you worried about your chances of getting into medical school? Don't worry, you are not alone. All of us have felt that way before and we have overcome various academic and life challenges to be where we are now. We truly understand what you are going through. In this guide, we share detailed stories of how each of us navigated our personal journeys to reach successful outcomes. 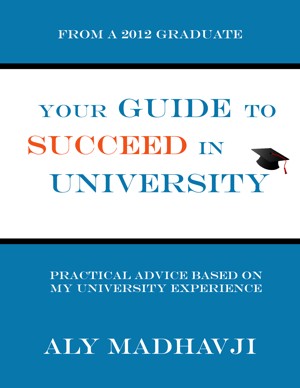 How to succeed in university or college? Every student wants to know and this guide is here to help! This book will help students with topics such as building a solid foundation in their first year, efficient techniques for studying and preparing for exams, getting involved, finding the right mentors, networking, job searching with potential employers and preparing for a successful career.

You have subscribed to alerts for Aly Madhavji.

You have been added to Aly Madhavji's favorite list.

You can also sign-up to receive email notifications whenever Aly Madhavji releases a new book.