Born in Brooklyn, NY where trees actually grew, front yard and back and all along the streets. I grew up in the Midwood section of Brooklyn, walking to both elementary school and high school (PS 217 and Midwood High School). My footnote in Brooklyn history is that I was a member of the last 8th grade graduating class in Brooklyn. Jr. High Schools were the educational rage of the day.
My early childhood was one of motion. I was born in Maimonides Hospital and was brought home to Prospect Place above the subway station. It was in walking distance of Prospect Park. Then in fairly quick succession we moved to the New Ponsit Section of Belle Harbor Queens, right across the Marine Parkway Bridge, a bridge I once bicycled across from my home to impress a red-headed beauty of my dreams (she was 12). I got a flat time and arrived looking like a grease monkey. But she did kiss me hello and goodbye at moment her older brother did not have an eye on her. From there is was back to Prospect Place and then around the corner to a larger, more modern apartment building 500 Ocean Avenue. It had a terrace from which one could see the Trolley Cars on Church Avenue and the occasional Organ Grinder with monkey in tow looking for money.
My final destination, before leaving for college, was to Waldorf Court. A 1906 3 story house with basement on a dead-end street. Now more idyllic place for city life could be found. We could walk four blocks to Avenue H, the local BMT stop, and drop in at Lou and Al's Candy Store, which sold a limited amount of candy but lots of most anything else a kid could want. Here I learned about lime rickeys, cherry cokes, and egg creams. The house was sold at first for about 8 grand. We bought it for maybe 20, sold it for maybe 40, and find out did I that about 10 years ago it went for a million bucks!
Graduating from Midwood in '60, I attended The George Washington University in the District of Columbia twice, BA and MA.
My work life started like my childhood. I spent two and a half years in Johnstown, Pa and 1 1/2 in Boulder, Colorado, then 4 in Stamford, Ct before beginning a 33 year stint with the American Jewish Committee followed by a 2nd career of 8 years with the Palm Beach County Sheriff's Office.
My mother was one of those who believed that little pitchers should be seen and not heard. I've been writing then since I could hold a pen. I wrote probably 800 love letters to one girlfriend and finally had my first piece published in the 1970's by News Day Newspaper. And I haven't stopped since. Mostly an op ed columnist I've written from most of the major newspapers in the southeastern United States. I had four articles published in USA Today and a 3,500 word feature in the Sunday Magazine of the St. Pete News.
I'm married, have 3 children, two grandchildren, and a cocker spaniel named Jax.
That's all folks.

How has Smashwords contributed to your success?
I worked for 33 years for an organization I had never heard of when I applied for the job. It turned out spectacularly. I had never heard of "Smashwords," which I still want to call "Smashmouth" (you can take the boy out of Brooklyn....) until I'd done some research. I trust this second relationship starting with no knowledge even of the existence of the organization will turn out just as spectacularly.
What is the greatest joy of writing for you?
Writing, particularly the kind I do, allows me to share a variety of experiences and observations from the cat-bird's seat I've had in life, a seat I scramble up to quite often for escape. Writing therefore, truth be told, is also therapy. You'll understand if you read my profile... The temporal joy is the writing itself. The spiritual joy is in the response. A comment, kind or not, means I have touched someone. That is a wonderful feeling, that my words meant enough to someone that they took the time to respond.
Read more of this interview.

Where to find Bill Gralnick online 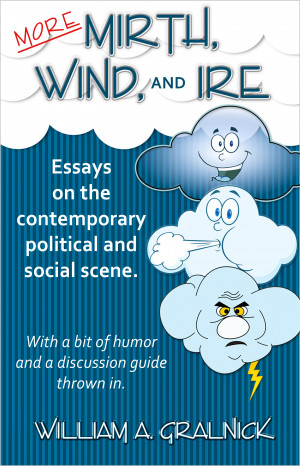 More Mirth Wind & Ire by Bill Gralnick
Price: $2.99 USD. Words: 65,790. Language: English. Published: November 10, 2017. Categories: Essay » Political, Nonfiction » Politics & Current Affairs » Social policy
More Mirth, Wind & Ire is the sequel to Mirth, Wind, and Ire. It expands the number of America's unresolved social and political problems. issues that stretch back as three or four decades. The essays are grouped by title subject, not topic subjects. The book offers the to the reader, or book club, a discussion guide for how to discuss and approach resolve issues locally. 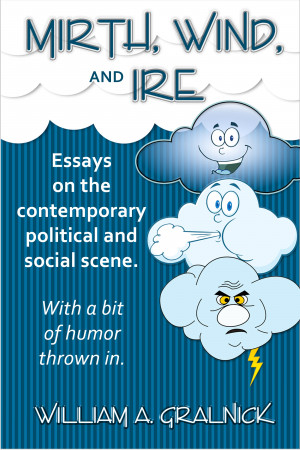 Mirth, Wind, and Ire is a book of essays on the contemporary social and political scene--with a bit of humor thrown in. An easy read, using case studies, that is engaging yet challenging, the reader travels through five sections exploring: the world around us, religion, intergroup issues, topics from the international scene, and of course politics. Like Levy's Bread says, "Try It, You'll Like It"

You have subscribed to alerts for Bill Gralnick.

You have been added to Bill Gralnick's favorite list.

You can also sign-up to receive email notifications whenever Bill Gralnick releases a new book.