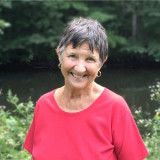 Having received a library card before she began kindergarten (requiring her cursive signature), Andrea began her writing career at the age of five with a short story describing the seasons. Her next endeavor, at age nine, was a novella featuring Christine O’Leary. So began Andrea’s long love affair with the written word.

Singularly focused on a nursing career, Andrea continued to write for pleasure throughout high school and college. After completing a master’s degree to teach nursing, she was offered a position as a nurse editor with the American Journal of Nursing, where she honed her writing skills through editing others’ works.

Andrea was in the midst of writing a novel styled as a memoir when her husband John’s Parkinson’s disease progressed to the point where he was unable to engage in his usual active lifestyle. He longed to “do something,” so she suggested they write a book together. She had long considered writing a mystery series based on some of her experiences in her second career as an attorney, and they settled on one of her early cases as the basis for a book.

It was a great opportunity for both. Andrea had left a long career in a “publish or perish” university setting prior to becoming an attorney. It was hard for her not to view writing fiction as lying on paper. John helped her to push the uneasy feeling that was the seed for Woodson Falls: 16 Lakeview Terrace into a believable plotline. It was Andrea’s long service as the chief elected official of a small town in Connecticut that provided the story’s sense of place.

Andrea is the author of three award-winning texts in the area of nursing education and staff development as well as numerous articles in peer-reviewed nursing and education journals. Woodson Falls: 16 Lakeview Terrace is her first foray into the world of fiction, but it won’t be her last. She collects teddy bears and birdhouses, loves to garden and bake bread, and writes from Sherman, Connecticut.

Where to find Andrea O'Connor online

You have subscribed to Smashwords Alerts new release notifications for Andrea O'Connor.

You have been added to Andrea O'Connor's favorite list.

You can also sign-up to receive email notifications whenever Andrea O'Connor releases a new book.