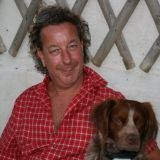 Andy Frazier is an author of children's stories. Occasionally he writes things for grown ups too but he finds this quite hard as he has never quite grown up himself. He has always wanted to write ever since he was a child and now he can't think of anything he would rather do. He gets his most enjoyment out of creating colourful characters and then bringing them to life in humorous situations.
History

Born into a life of farming, it took a long time and a lot of determination to get away from it, but he thinks he has just about achieved that now. Andy did quite a few things during his career, including agricultural contracting, retail sales, sheep breeding and IT before he somehow became a business analyst working in a city. Oh yes, and at one time he was an expert in grooming cows. It all made sense at the time.

One day, he had a eureka moment and upped sticks to South West France. He now lives there on a smallholding where he shares his time equally between his partner, some more sheep, some DIY tools and a set of golf clubs. Despite all the obvious distractions that renovating a big old farmhouse presents, Andy spends most of his mornings writing and that is the bit he enjoys most.

Where to find Andy Frazier online 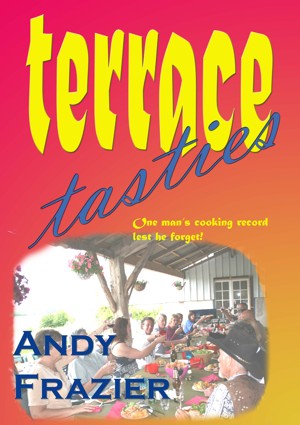 Terrace Tasties by Andy Frazier
Price: $0.99 USD. Words: 3,900. Language: English. Published: December 9, 2011. Categories: Nonfiction » Cooking, Food, Wine, Spirits » Outdoor cooking
Terrace Tasties is not really a cook book, more of a documentation of successful things that have happened on the terrace at Chauffour concerning food. Chauffour is an old farmhouse in the Lot-et-Garonne region of south west France. On Chauffour terrace, anything goes, as those of you have been there will agree! Especially chutney, we love chutney!

You have subscribed to alerts for Andy Frazier.

You have been added to Andy Frazier's favorite list.

You can also sign-up to receive email notifications whenever Andy Frazier releases a new book.