I’m Annie Appleton, author of cosy mysteries with a twist.
My books blend my love for mysteries, animals and the slightly surreal in a humorous style. I realise there are talking rats in my books, but I firmly believe in my readers' ability to suspend their disbelieve.

I love cats, baking and reading mysteries. I’ve also done my fair share of knitting. Besides that I have spent nine months of my life working on containerships and many a night looking at the sky in search for the International Space Station.

In 2004, I was lucky enough to move to the English City of York, where I ended up in a close-knit, but vibrant community. I soon fit in, thanks to a part-time job at the local deli and an allotment society vegetable plot.

I’m now back in my native Netherlands, where I live with my three little rats, a garden that’s occasionally full of weeds and a pond filled with frogs and newts.

Having written two non-fiction books about York, I’m is now using my time in York as inspiration for my cosy mystery books.

The first series centres around Jacob Hicks, local physics teacher and generally regarded as the ‘village idiot’, and Paddy the Rat, observer of all things human.

Where to find Annie Appleton online

Jacob Hicks Murder Mysteries by Annie Appleton
Jacob Hicks is a brilliant physicist, forced to take a job as a physics teacher at the local secondary school. His neighbours mockingly call him the ‘professor’. Jacob is seemingly oblivious to what is happening around him, but his best friend Dave knows that Jacob has keen observational skills and great perception. When murder comes to Milbury, Jacob is labelled a suspect and he has no choice but to use his skills to save his own reputation. Much to his dismay the only way to do this is by working together with Emily, Dave’s scary niece, who herself is on probation for kicking a policemen in the shins and taking a bite out of another one. As the humans give each other a hard time, there is a group of rats in Milbury, who are both baffled and fascinated by the behaviour of their two-legged neighbours. One rat in particular, Paddy, is just as keen an observer as Jacob. While dealing with their own problems, Paddy and his friends might sometimes unwittingly help the humans solve the crimes. 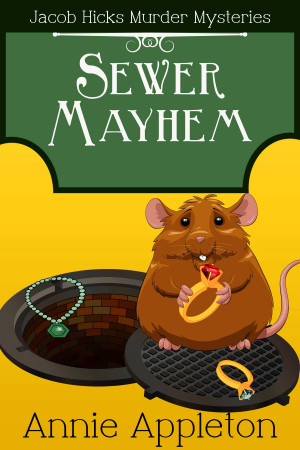 Sewer Mayhem (A Jacob Hicks Murder Mystery) by Annie Appleton
Series: Jacob Hicks Murder Mysteries, Book 2. Price: $2.99 USD. Words: 80,640. Language: British English. Published: March 29, 2019 by FTK Publishing. Categories: Fiction » Mystery & detective » Cozy, Fiction » Mystery & detective » Traditional British
When a shop owner gets murdered, Jacob Hicks and Emily are drawn into solving the mystery. Then a horrible sewer smell starts spreading itself along Woolaston Road. Meanwhile Paddy the Rat and his pal Vinnie hope for a quiet holiday in the sewers under Woolaston Road. When a backpack full of treasure appears, the nefarious Rat Mafia want to get their paws on it. 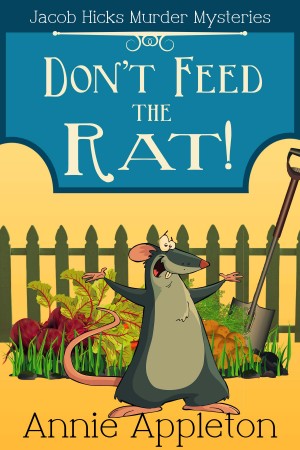 Don't Feed the Rat! (A Jacob Hicks Murder Mystery) by Annie Appleton
Series: Jacob Hicks Murder Mysteries, Book 1. Price: $1.99 USD. Words: 78,770. Language: British English. Published: May 1, 2017 by FTK Publishing. Categories: Fiction » Mystery & detective » Cozy, Fiction » Mystery & detective » Traditional British
When Jacob Hicks, resident weird professor, is the suspect in a murder case, he reluctantly sets out to prove his innocence. With Emily, on probation for biting a policeman, he delves into the gossip and lies of the local allotment society, where gardening tools can be deadly weapons. Meanwhile, Paddy the Rat is plagued by teenage rat Cecil, while his childhood bogeyman has come alive.

You have subscribed to Smashwords Alerts new release notifications for Annie Appleton.

You have been added to Annie Appleton's favorite list.

You can also sign-up to receive email notifications whenever Annie Appleton releases a new book.