After counselling teenagers and adults for over 40 years, Bruce Corbett retired to concentrate on his writing and photography. To date, he has written a collection of Science Fiction short stories and two Science Fiction novels. His greatest project, however, is his series of historical novels based on a fictional hero, Ambrose, Prince of Wessex, set in the time of Alfred the Great.

Where to find Bruce Corbett online

The Ambrose Chronicles by Bruce Corbett 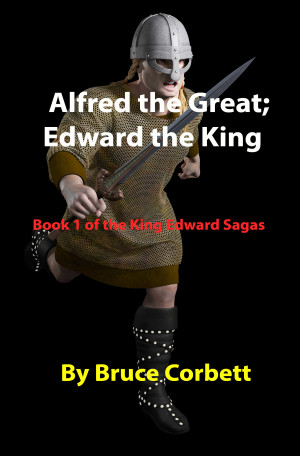 Alfred the Great; Edward the King by Bruce Corbett
Series: The Ambrose Chronicles, Book 10. Price: $3.99 USD. Words: 71,470. Language: English. Published: October 28, 2013. Categories: Fiction » Historical » Medieval, Fiction » Historical » United Kingdom
King Alfred the Great is dead, and young Prince Edward must persuade the Witan that he should be the next king. His own royal cousin, Ethelwold, rebels, and is soon leading an unholy alliance of influential noblemen and Vikings. Wearing the Viking crown of Northumbria, he invades Wessex. Can Edward keep his throne? Will Wessex finally fall to the Viking onslaught? 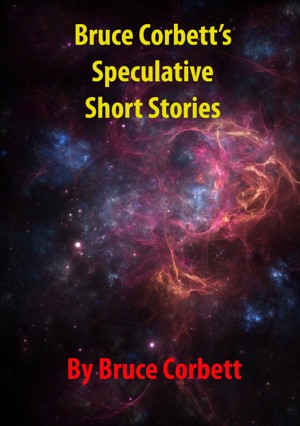 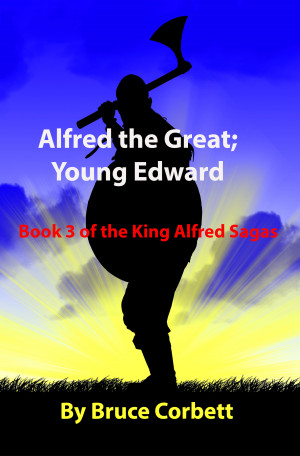 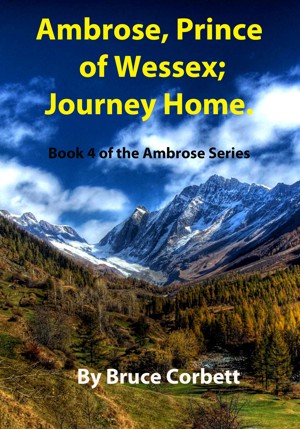 Ambrose, Prince of Wessex; Journey Home. by Bruce Corbett
Series: The Ambrose Chronicles, Book 4. Price: $3.99 USD. Words: 72,250. Language: English. Published: April 28, 2012. Categories: Fiction » Historical » Medieval, Fiction » Adventure » Men’s adventure
Ambrose and his comrades flee north through Italy, doggedly pursued by Byzantine Admiral Demetrious, whose orders are to kill Ambrose and his companions at all costs. With the pass to Frankland blocked for the winter, they are trapped in northern Italy. Before the friends can escape to France and England, they must face assassins, avalanche, bandits, and savage Viking raiders. 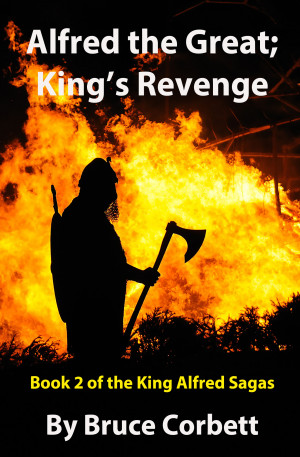 Alfred the Great; King's Revenge by Bruce Corbett
Series: The Ambrose Chronicles, Book 8. Price: $3.99 USD. Words: 71,810. Language: English. Published: April 28, 2012. Categories: Fiction » Historical » Medieval
After seven years of hard-won peace, a Viking army lands in Wessex. With traitors within, and two Viking kings to his north, Alfred the Great nevertheless drives out the invaders, but antagonizes the powerful Viking king just across the Thames River. The West Saxons cross the Thames, take London, and prepare for the battle which will decide the fate of all Britain. 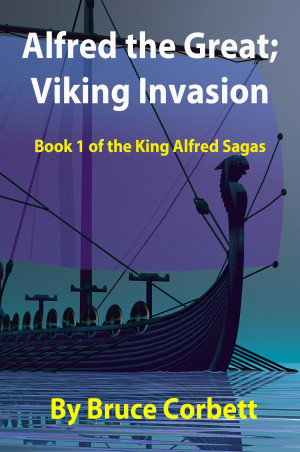 Alfred the Great; Viking Invasion by Bruce Corbett
Series: The Ambrose Chronicles, Book 7. Price: $3.99 USD. Words: 94,470. Language: English. Published: April 14, 2012. Categories: Fiction » Historical » Medieval
When the leader of the Great Army invades Wessex in early winter, he nearly succeeds in Capturing Alfred and destroying the last independent Saxon kingdom in Britain. King Alfred hides in the forest, until he finds a base deep in the fastness of a marsh. Spring finds his men rallying to his banner, and eventually Alfred defeats the Viking king. Britain is saved. 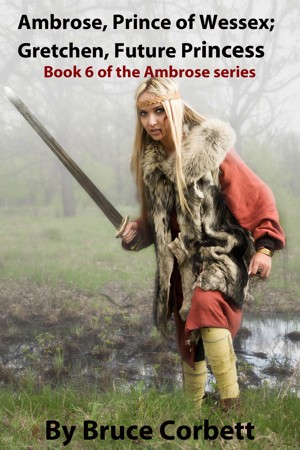 Ambrose, Prince of Wessex; Gretchen, Future Princess. by Bruce Corbett
Series: The Ambrose Chronicles, Book 6. Price: $3.99 USD. Words: 81,210. Language: English. Published: March 25, 2012. Categories: Fiction » Adventure » Action, Fiction » Historical » Medieval
Ambrose's betrothed is kidnapped by Welsh brigands, and then Norse pirates. With the army of Wessex at his back, the prince first attacks a Welsh coastal stronghold, and then travels the length of hostile Ireland trying to find his beloved Gretchen. Rebuffed by the Jarl who holds her captive, he returns to Wales and trains two ship crews so he can intercept and free his love. 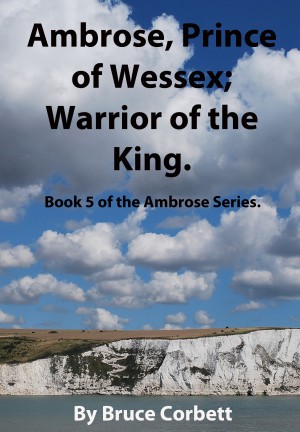 Ambrose, Prince of Wessex; Warrior of the King. by Bruce Corbett
Series: The Ambrose Chronicles, Book 5. Price: $3.99 USD. Words: 78,410. Language: English. Published: March 4, 2012. Categories: Fiction » Historical » Medieval, Fiction » Adventure » Men’s adventure
Ambrose rides north with his brother the king to face the all-conquering Great Army of the Vikings. When the battle is averted, Ambrose and his friends ride north as spies and join the Great Army. Recognized, the friends must flee and battle their way back to safety. Ambrose is wounded and only the love of a maiden and friendship of a trader saves him. 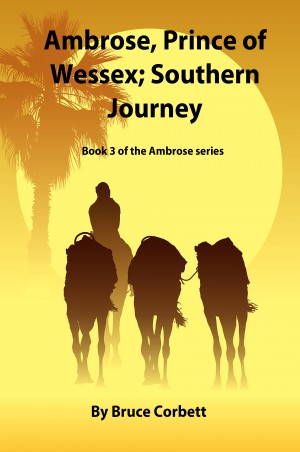 Ambrose, Prince of Wessex; Southern Journey. by Bruce Corbett
Series: The Ambrose Chronicles, Book 3. Price: $3.99 USD. Words: 84,920. Language: English. Published: January 2, 2012. Categories: Fiction » Historical » General, Fiction » Adventure » Men’s adventure
Ambrose and his friends flee Constantinople. The prince hopes to return to his native Wessex. Caught by pirates, they are enslaved on Crete, but manage to escape to Alexandria. A long chase ensues, with a Byzantine admiral desperately trying to capture them. They are forced to fight and brave the open desert. Finally they manage to sneak into Italy, but even there the chase is not over. 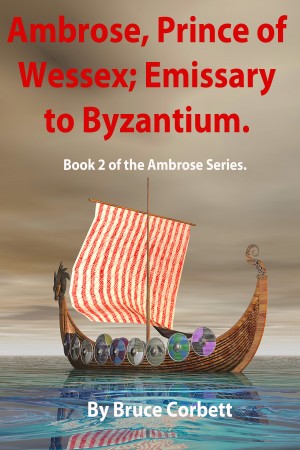 Loosely based on the Primary Russian Chronicles, the story is of a Saxon prince and his two companions who arrive at the time of the founding of a Viking empire on the major rivers of Russia. In spite of implacable enemies and rapids, the Vikings and their allies swarm down the Dnieper River and attack the queen of cities -Constantinople. 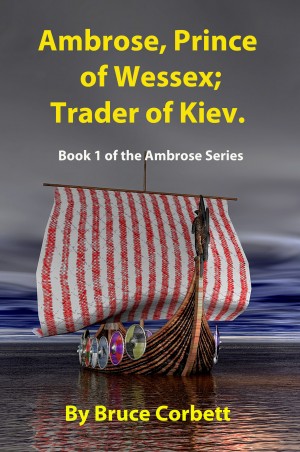 A young prince of Wessex is captured by Viking raiders. He and his friends manage to escape captivity in Denmark, and begin an epic journey to Norway and then Sweden. The rest of the story is loosely based on the Primary Russian Chronicles. There, they join a Viking expedition to conquer Novgorod, and, within a year, they travel down the mighty Dnieper river to settle in Kiev.

You have subscribed to alerts for Bruce Corbett.

You have been added to Bruce Corbett's favorite list.

You can also sign-up to receive email notifications whenever Bruce Corbett releases a new book.