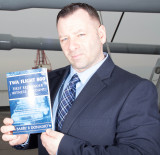 Barry Donadio | Spy Newspaper | June 16th 2018
The Spy continues with a conversation with Republican Barry Donadio from Queen Anne's County. Like many residents of western Queen Anne's, Barry commuted across the Bay Bridge from his home in Chester for more than a decade as part of the Secret Service assigned to protect both presidents George W. Bush and Barack Obama. After retiring in 2013, he quickly signed up as a volunteer for the GOP in QAC and eventually ran and won a seat on the county's Republican Central Committee the following year.

You have subscribed to alerts for Barry Donadio Celebrity Author.

Would you like to favorite Barry Donadio Celebrity Author?

You have been added to Barry Donadio Celebrity Author's favorite list.