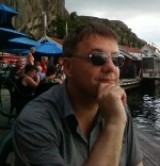 He was overexposed in early childhood to Doctor Who, Thunderbirds and Star Trek, which set him on the science fiction trail. He started writing science fiction himself at the age of 18 in the mistaken belief that it would be quite easy (it isn't) and keep him from having to find a real job (it didn't). He sold his first short story in 1989 and has now had 18 of them published, mostly in Interzone.

Ben's ambition is to live to be 101 and 7 months, so as to reach the 1000th anniversary of the Battle of Hastings and the arrival of the man responsible for Ben's unusual surname – a Danish mercenary called Jep, whose name features in the Domesday Book and who fought for William the Conqueror – in the British Isles. At least, so family legend has it, and who is he to quibble with a good legend? It's not everyone who gets to celebrate a thousandth family anniversary. Ben hopes there will be other descendants of Jep around to remind him what he's staying alive for.

He is English, and as quietly proud of the fact as you would expect of the descendant of a Danish mercenary who fought for a bunch of Norsemen living in northern France.

Where did you grow up, and how did this influence your writing?
All over - my father was in the military and we moved house every 2-3 years. I only got stability from ten years of boarding school. I hadn't thought that that might influence my writing, but I suppose it did. All my characters tend to be outsiders, not quite fitting in as other people think they should, and that nicely describes my own feelings about coming "home" into yet another new neighbourhood.
When did you first start writing?
For fun, around about the age of 7. In earnest, after leaving school. In my last year at school I read a collection of science fiction stories edited by Kingsley Amis: The Golden Age of Science Fiction. It featured a story called "The Quest for St Aquin" by Anthony Boucher, about a robot that uses Aquinan logic to deduce the existence of God. This aspect of it left me cold at the time. More obviously, even to readers with non-philosophical and theological backgrounds, it’s set in a post-apocalyptic world where Christianity is illegal and persecuted.

In the summer after A-levels, unemployed and bored in Aldershot, I started writing my first proper story. Curiously enough, it was about a world where Christianity is illegal and persecuted. In my world all the Episcopal denominations had fled to Mars where they had united under one leader. The working title was "Where Is Now Thy God?", after Psalm 42, and the subtle intention was to slip in incontrovertible proof of the truth of Christianity that would convert anyone who read it. That kind of intention was to sabotage a lot of my future writing efforts.

At least I finished it (unusually for my work in that period), though I forget exactly what happened. No surviving copies exist, which is very good news for me and very bad news for potential blackmailers, since I’d take out a second mortgage and pimp my sister if it kept that manuscript out of the public eye. But from then on I was writing.
Read more of this interview.

Where to find Ben Jeapes online

You have subscribed to alerts for Ben Jeapes.

You have been added to Ben Jeapes's favorite list.

You can also sign-up to receive email notifications whenever Ben Jeapes releases a new book.