I live in Montréal, Québec, Canada, with my lovely wife and equally lovely (and lively) daughter. My day job is as a programmer, something which I do find satisfying. However, I've always been an avid reader, and science-fiction has always had a special place in my heart.

I had written unpublished long-form works in the past, and decided in 2019 that it was time for me to try to write something others might want to read. Hopefully I have succeeded, and will continue to do so in future.

“I, Cunningham” is the first such work. I want to keep on writing more novels. For one, Cunningham's story does not end there. But I also want to branch out to other backgrounds.

I hope you will enjoy my work, and that it will prompt you to read other works I've liked. “Traditional” science-fiction has waned a little bit in the last couple of decades, replaced by dystopian works, cyberpunk, and fantasy. There is nothing wrong with those other genres, yet I feel that traditional hard SF is still enjoyable.

What's the story behind your latest book?
It's a bit convoluted.

In 2017, I started translating a classic video game, Phantasy Star IV, from English to French. That was mostly done so my daughter, who read zero English at the time, could enjoy the game. At the time, a project that made the translation relatively easy had just been published, so I did a quick translation (it later grew into a much more sophisticated project, but that's another story). While doing that, I reflected that the game's setting would be perfect for a hard Sci-Fi novel, if the mystical/psychic elements were removed from the game. I wrote a quick vignette with some preliminary ideas, and left it at that.

My daughter kept bugging me about this. Would I complete the story? I had heard of NaNoWriMo, and decided to postpone my story completion to November 2018, not thinking much of it.

Unfortunately (or fortunately?), she remembered :) So now I was stuck, I had to do it. So, I did. It was fun, but I wasn't that happy with the end result, even though she did like it (I wrote it in English first, then translated it in French for her enjoyment). The whole thing was structured like a computer RPG, and it showed.

On the other hand, I had a nice background worked out from that. I decided that my NaNoWriMo entry left some room for more adventures in different star systems, and that each would be totally isolated. So I was free to start a totally new book for NaNoWriMo 2019. But I needed some ideas.

The idea came from reading up on deep-learning systems, and how they are called AI by the media and even some researchers. This always annoyed me; those systems are not able to reason in a new situation, and are likely to do something wildly nonsensical in such. But I wondered whether it could be the seed of a story about AI. Thus, "I, Cunningham" was born.

I finished the draft on time during NaNoWriMo 2019, and spent much of my free time between then and July 2020 reviewing/editing/polishing the book. Hopefully it shows!
What motivated you to become an indie author?
I don't feel Sci-Fi gets a lot of traction in traditional publishing houses at this point. Fantasy, sure. Also, post-apocalyptic or cyberpunk does get some traction. But traditional, "dryer" science-fiction, not so much. Yet, that is what I wanted to write.

It didn't help that all publishers I checked had submissions closed. The book was written and I wanted it available to readers so they could tell me whether I'm a decent writer.

Basically I'm too impatient not to be an indie. That's probably not an awesome reason, but there you go.
Read more of this interview.

Where to find Benoit Goudreault-Emond online 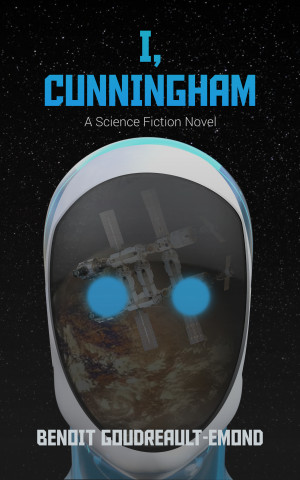 I, Cunningham by Benoit Goudreault-Emond
Price: $2.99 USD. Words: 89,050. Language: Canadian English. Published: July 4, 2020. Categories: Fiction » Science fiction » Hard sci-fi, Fiction » Science fiction » General
Gordon Cunningham, an ordinary citizen of 22nd century Earth, died in an unfortunate accident. Except he didn’t die. Not really. Instead, he wakes up stuck inside a robot. In the 29th century. Thirteen light-years from home. In a space station orbiting a doomed colony. If nothing is done, all colonists will die within 100 years. But who will help Cunningham?

You have subscribed to alerts for Benoit Goudreault-Emond.

You have been added to Benoit Goudreault-Emond's favorite list.

You can also sign-up to receive email notifications whenever Benoit Goudreault-Emond releases a new book.