Bill is an award winning Canadian author. He has written 18 books, three plays, several documentary and educational film scripts for both children and adults and a number of articles. He is a past chair of The Writers Union of Canada. www.billfreeman.ca

Before doing graduate work, Bill worked at a variety of jobs and traveled widely. He holds a PhD in Sociology and taught in community colleges, McMaster and York Universities. He is active in Toronto community groups.

Today Bill devotes his time to writing. He is best known as the author of the popular books for young adults, called the Bains Series. The first book in this series, Shantymen of Cache Lake, won the Canada Council Prise for Juvenile Literature and the series was awarded the prestigious Vicky Metcalf Award. There are nine books in this series of historical novels for young people. They are all set in Canada in the 1870s.

Bill continues to write young adult fiction, but he also is the author of several successful non-fiction books for adults. His book, The End of War, published in 2011, is a continuation of work in that area. He has also written extensively on cities and has a forthcoming book on Toronto that will be published in September 2013.

As well as authoring books, Bill has worked in theatre, television and educational videos. He has been a successful researcher and script writer working in collaboration with well-known film and video directors and producers such as Richard Nielsen and Wendy Loten.

Hard Riding is his latest venture. This book is a novel for adults featuring Mariner, a detective in the Toronto Police Department. Bill has written a second book in the series called Street Girls. It will be published in the spring of 2013. He plans to write several other books featuring Mariner.

Two of Bill’s plays have been produced by professional theatre companies. Glory Days was produced twice by Hamilton’s Theatre Aquarius and a book of the script and an essay describing the strike was published by Playwrights Canada Press. A new work “Foreplay” is currently being work shopped.

Bill Freeman lives on Toronto Island with his partner Paulette Pelletier-Kelly and has four grown children. Between Paulette and Bill they have seven children and five grandchildren.

•Active participant in The Writers’ Union of Canada. Chair 2004-05
•Member PEN Canada
•Founding member of CommunityAIR
•Founding member of VoteToronto.ca.
•Bill’s website is www.billfreeman.ca
•The End of War blog is www.endofwar.ca
•Bill is an associate of Boularderie Island Press. http://boularderieislandpress.com

Where to find Bill Freeman online 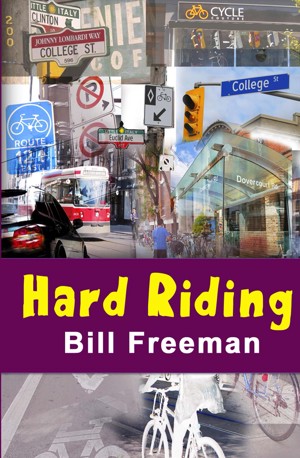 Hard Riding by Bill Freeman
Price: $2.99 USD. Words: 43,210. Language: English. Published: December 18, 2012. Categories: Fiction » Mystery & detective » Police Procedural
Detective Mariner of the Toronto Police Department becomes involved in a case of a cyclist killed by a car on a city street. As he probes and talks to the witnesses he finds that the driver is anything but an innocent who just happened to hit this woman on her bicycle. Hard Riding is a novel that explores fascinating characters and situations as Mariner struggles to determine the level of guilt.

You have subscribed to alerts for Bill Freeman.

You have been added to Bill Freeman's favorite list.

You can also sign-up to receive email notifications whenever Bill Freeman releases a new book.