Brendan Smith was born in Zimbabwe and grew up in South Africa. He has an amazing life story, and many incredible accomplishments, including serving in the British Army, travelling the globe, and now educating the church. Brendan attended Maritzburg College before studying Business Finance at Pietermaritzburg University, South Africa. He then was a youth pastor at an Assemblies of God church, before being led by God to join the British Army, where he would serve for 10 years. Brendan attended the Royal Military Academy, Sandhurst, the British Army officer academy. As an officer, Brendan specialised in Civil Military Cooperation (CIMIC), NATO's Humanitarian Aid Division. He served in Germany, Norway and Cyprus, where he was an active member of the Armed Forces Christian Union, Military Missions International, and Alpha for the Forces.

In 2006, Brendan was deployed to Afghanistan as a Captain, to conduct CIMIC operations. After back to back tours, he resigned his commission to pursue a life in full time ministry. He was employed as the Africa Director of The Barnabas Fund, a Christian charity organisation until 2010. Brendan is passionate about fighting injustice. He has traveled extensively throughout Africa, Europe ,the Middle East and South East Asia, supporting and encouraging the persecuted church, teaching on Islam, and fighting the root causes of poverty and oppression. Brendan has recently been involved with "Foundations for Farming" in Zimbabwe, and is currently on staff at His Church in Pinetown South Africa. He sits on the board of the Religious Liberty Commission of South Africa and Kwa-Care, a poverty alleviation charity in South Africa. He has written two books on Islam and one on his experiences in the British Army, entitled "In His Shelter"

Where to find Brendan Smith online 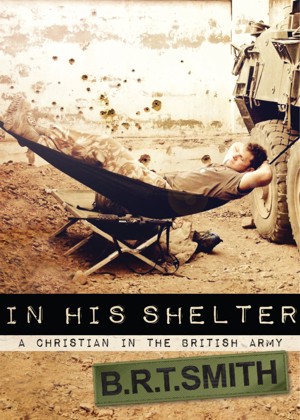 Smith’s gripping and humorous memoir details his time in the British Army as a Humanitarian Aid Officer. The story follows Smith from day one of Basic Training to his last day in Afghanistan, a decade later. Thrilling accounts of surviving ambushes, riots and suicide bombs make In His Shelter an entertaining and inspiring tale of faith, adventure and friendship.

You have subscribed to alerts for Brendan Smith.

You have been added to Brendan Smith's favorite list.

You can also sign-up to receive email notifications whenever Brendan Smith releases a new book.