Brian Rees M.D. retired from the US Army Reserve as a colonel after 37 years of commissioned service. A graduate of the US Army War College, he is a veteran of five tours in Iraq and Afghanistan, and spent eight years in hospital commands.
Dr. Rees received his medical degree and master’s degree in public health from Tulane University and is a board certified family physician. He has had his own private practice; after 9/11 he served as a physician in the California state prison system, as well as in the Veterans Administration.
He has researched and written about the application of the Transcendental Meditation technique for the promotion of soldier resilience, resolution of PTSD, and the reduction of violent conflict. Recently Dr. Rees was the lead author of two studies published in a peer reviewed journal regarding the application of TM in Congolese refugees with posttraumatic stress.

1. Who are you and what is this book about?
I’m a physician who was in the US Army (active and reserve) for over 37 years. I received mobilization orders seven times since 9/11; five of those deployments were to Iraq & Afghanistan. While there I wrote many emails home. They gave my friends and family an inside look at life at Saddam Hussein’s trial, Abu Ghraib, Camp Bucca, Kandahar, Bagram, and elsewhere. People told me ‘this is great stuff, you should put it in a book.’ Since the emails rendered the book already half-done I went ahead and completed it. But while I was in theater I also considered, why was I there? Why do we go to war? Much of the book deals with what I learned about war.
2. What did you find most difficult in the Middle East?
Family separation is tough, and the environment was often unpleasant; but most difficult are the casualties, including those of civilians on the battlefield. Warfighters have an incredible challenge trying to fight an insurgency, often in populated areas with children and other non-combatants nearby.
Read more of this interview.

Where to find Brian Rees online 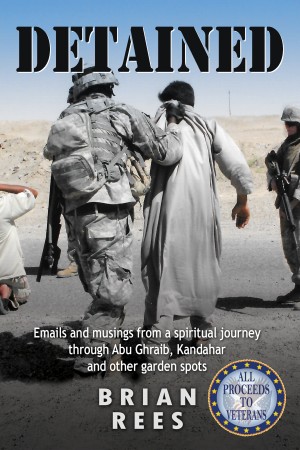 Detained: emails and musings from a spiritual journey through Abu Ghraib, Kandahar, and other garden spots by Brian Rees
You set the price! Words: 193,080. Language: English. Published: August 12, 2015. Categories: Nonfiction » Politics & Current Affairs » Islamic militancy, Nonfiction » Religion & Spirituality » Catholicism
In five deployments the author described Iraq & Afghanistan in emails home. He served as the doctor to insurgent detainees & at Saddam’s trial. He considers how Christianity, meditation, spirituality & the war of ideas within Islam, may affect our wars, our casualties & other challenges. Per BlueInk Reviews: “…powerful reading… irreverent… thought provoking and painstakingly researched material.”

You have subscribed to alerts for Brian Rees.

You have been added to Brian Rees's favorite list.

You can also sign-up to receive email notifications whenever Brian Rees releases a new book.